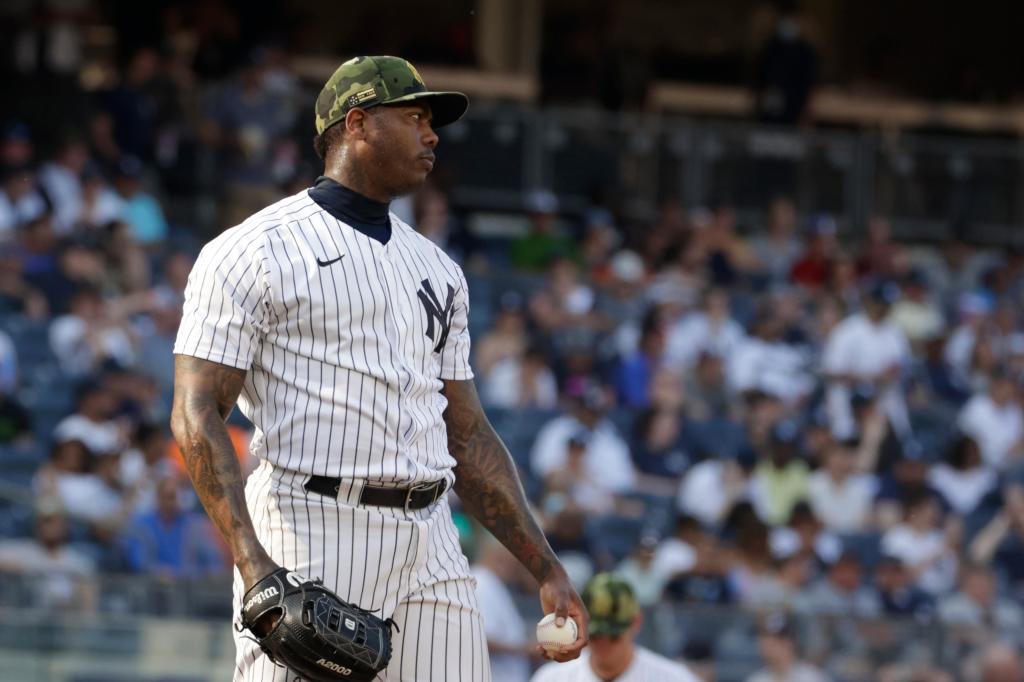 Clay Holmes had already begun to emerge as an alternative to — if not a replacement for — Aroldis Chapman in the Yankees’ closer role before Chapman went down with left Achilles tendinitis that landed him on the injured list.

Holmes has been a revelation since being acquired in a trade with the Pirates last season, and so far this year, he’s been sensational. He entered Tuesday’s game against the Angels having not allowed a run in his last 24 innings, covering 22 appearances.

And Holmes has six saves in six opportunities.

Asked on Tuesday if he’d be OK sharing the role with Holmes whenever he returns, Chapman said through an interpreter: “It’s simple: if we’re winning, it doesn’t matter where I’m at [in the bullpen].”

Chapman’s place in the bullpen had been in question for a while, and after being scored upon in five straight appearances, he was finally shut down.

The lefty played catch on Tuesday for the first time since being placed on the IL on May 24, but declined to put a time frame on a potential return since he’d yet to test the Achilles by running.

“You have to understand, this kind of injury requires a progression and taking rehab one day at a time,’’ Chapman said. “My arm feels really good. It was never affected, so that’s a plus. At the same time, you have to go one step at a time.”

The injury is just the latest issue for Chapman, who is part of a Yankee bullpen that had been as good as any in the majors until recently.

Not much has gone right lately, with Chad Green out for the season after tearing his UCL and Jonathan Loaisiga shut down with right shoulder inflammation.

After putting up some of the best numbers in baseball, the pen has faltered lately, with 20 earned runs in 26 ¹/₃ innings over the team’s previous 11 games heading into Tuesday night’s game against the Angels in The Bronx.

Holmes has been excellent in the back end of the bullpen, but others have seen their stellar starts to the season unravel a bit.

The lack of depth has hurt, as the Yankees were forced to go with untested Ron Marinaccio in Sunday’s 4-2 loss to Tampa Bay. He took over for Luis Severino in the seventh inning and allowed both inherited runners to score in what turned into the Yankees’ second straight loss.

They don’t seem to know quite what to do with Clarke Schmidt. Like King, Schmidt is valued for his ability to pitch multiple innings, but if a long-relief situation doesn’t materialize, the right-hander can be underutilized.

Loaisiga was having a letdown of a season after he was terrific in 2021 and the Yankees hope he returns to form when he comes back from his shoulder injury.

Wandy Peralta has been solid, but fellow lefty Lucas Luetge hasn’t been as effective as he was last season.

A return to form from Chapman would help.