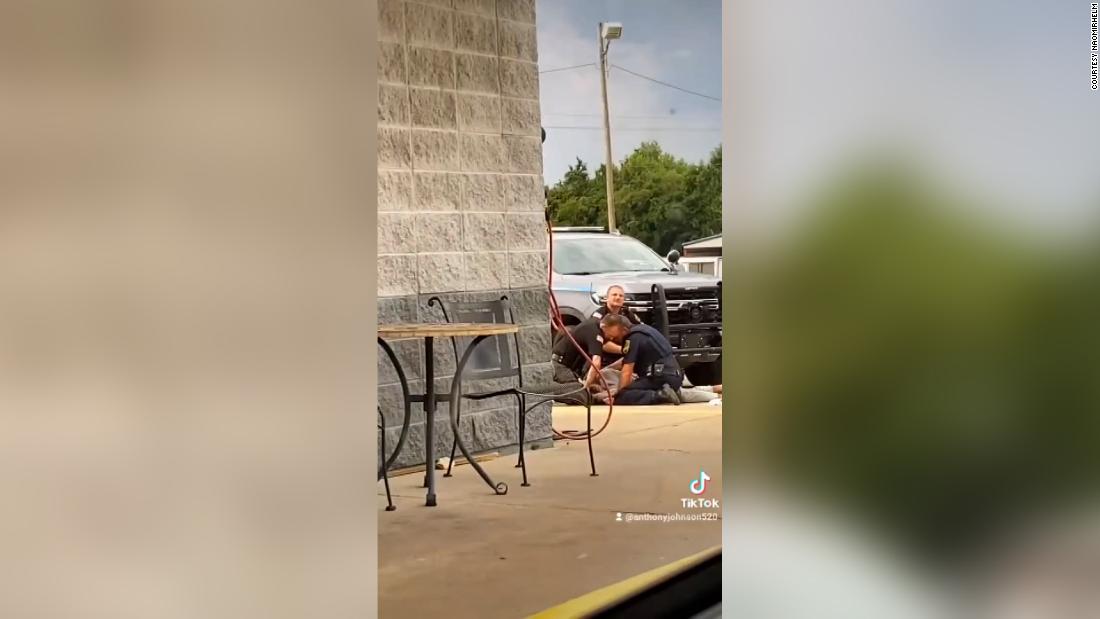 Two of the officers in the video are deputies with the Crawford County Sheriff’s Office and the third is an officer with the Mulberry Police Department, the agencies confirmed in statements Sunday.

The video, which was posted on social media, shows the officers restraining an individual near a curb, appearing to throw punches at the person’s face and kneeing the individual in the side and back.

A woman who is not seen in the video can be heard saying, “Don’t beat him! He needs his medicine!” One officer responds, “Back the f**k up!” while another orders her to get in her car.

The person who posted the video online said her sister witnessed the altercation outside the Kountry Xpress in Mulberry.

Crawford County Sheriff Jimmy Damante told CNN affiliate KHBS that the suspect was wanted for allegedly threatening a gas station clerk in a neighboring town. When he was spotted in Mulberry, Damante said the man was initially cooperative, but then tried to attack the officers, leading to the confrontation seen in the video. The sheriff told KHBS that the suspect was examined at a hospital and booked into jail, while a deputy received minor head injuries during the altercation.

Crawford County jail records show Worcester is being held on $15,000 bond. It was not clear Sunday night whether Worcester had an attorney.

The Mulberry police officer is on administrative leave pending the investigation’s outcome, the Mulberry Police Department said in a statement to CNN.

“The City of Mulberry and the Mulberry Police Department takes these investigations very seriously and holds all their officers accountable for their actions,” Mulberry police said.

CNN is unaware of other footage of the incident at this time.

“I have spoken with Col. Bill Bryant of the Arkansas State Police and the local arrest incident in Crawford County will be investigated pursuant to the video evidence and the request of the prosecuting attorney,” Hutchinson said in a post on Twitter.

CNN reached out to Arkansas State Police for comment on the investigation and did not immediately hear back.