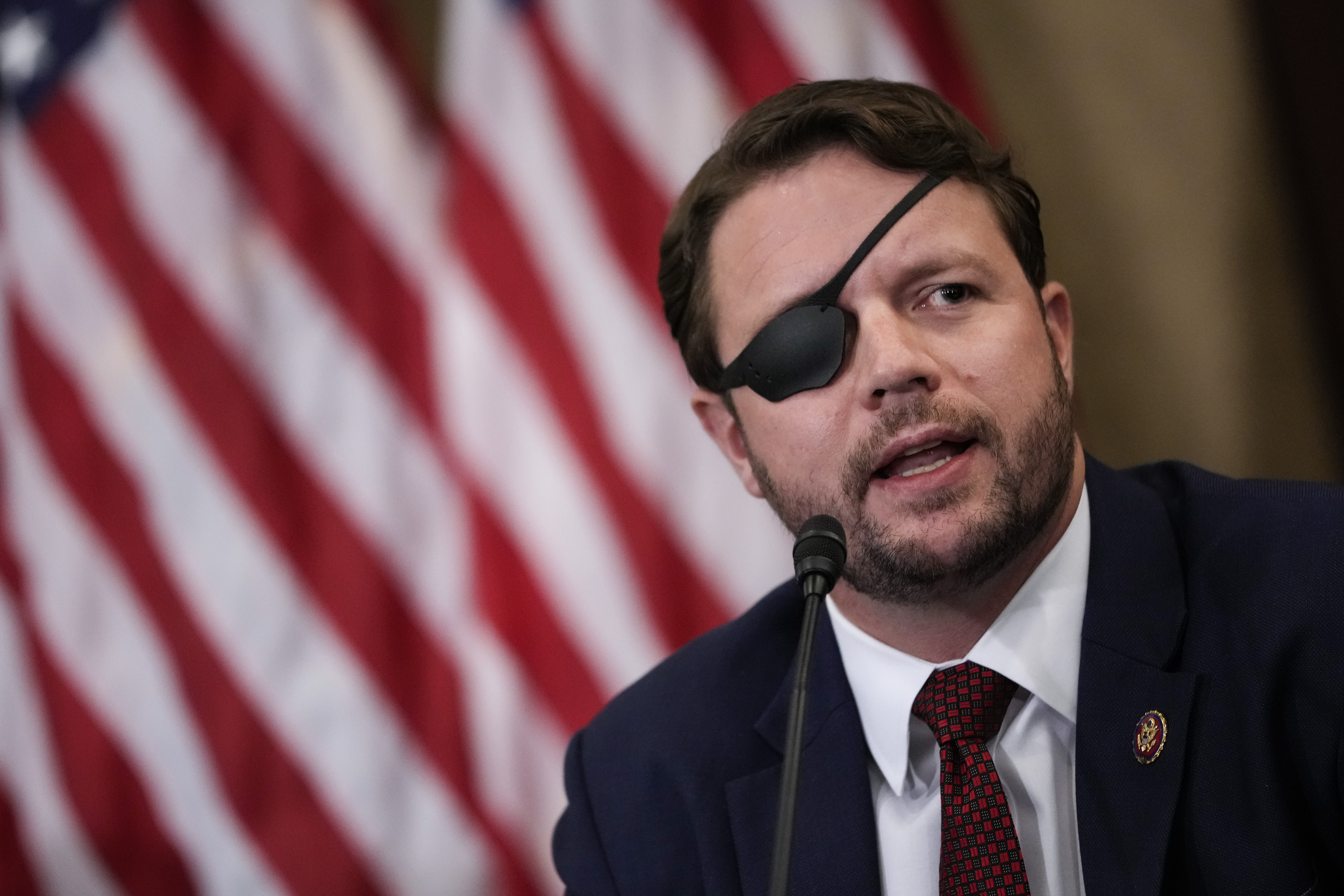 Depending on who you ask, it’s the RINOs versus the keepers of the faith — or the governing wing versus the obstructionists.

“I want a governing majority. That means electing serious people with real life experience and proven strength of character,” said Rep. Dan Crenshaw (R-Texas), before reflecting on his primary win in March and his friend Morgan Luttrell’s nomination in a neighboring district. Both faced opposition from candidates endorsed by MAGA hardliners looking to grow their numbers and influence in Congress.

“In Texas, voters chose substance over shallow sloganeering,” Crenshaw said. “That’s a good sign. Our ability to repeat that trend across the country will be critical to winning a majority.”

And redistricting has only turned up the temperature of the fight, creating new red-leaning open seats and forcing ideologically divergent members into brawls for survival. Up next week is West Virginia’s primary — where GOP Rep. David McKinley, who likes to tout that he is ranked the 10th-most bipartisan member of Congress, will face off against GOP Rep. Alex Mooney, a Trump-endorsed member of the famously obstinate House Freedom Caucus.

McKinley is one of 13 House Republicans to join Democrats in passing an infrastructure bill, which he touts as bringing desperately needed funds to the state’s crumbling roads and bridges. Now, McKinley has tried to turn his race into a referendum on whether the Republican base has any appetite for his brand of compromise — or if they want their elected officials to oppose President Joe Biden at all costs.

“Maybe I’m just Don Quixote,” McKinley said last month while campaigning in his northern West Virginia district. “Maybe I’m chasing a windmill. But I believe in my heart that America wants us to work together.”

Groups aligned with each side are already waging proxy battles in under-the-radar Republican primaries — where both factions are sounding the alarm on what could happen if their opponents prevail.

“It’s becoming an emblem of: If you get the majority back as Republicans — are you going to cave?” said David McIntosh, the president of the anti-tax Club for Growth, which is backing Mooney and other hardliners. “Or are you going to fight and block Biden’s bad agenda?”

McKinley is supported by the Republican Main Street Partnership, an organization whose mission is to deliver a “governing majority,” and the U.S. Chamber of Commerce — two groups that also backed state Sen. Theresa Gavarone in the Ohio primary where Majewski prevailed.

Those groups and their allies cast Gavarone, who has a long history in northwest Ohio politics, as someone who would be an effective and pragmatic lawmaker.

“I’ve always said, look where you can find compromise,” said Rep. Bob Latta (R-Ohio), a political mentor of Gavarone’s. “We have the same philosophy: You’re here to legislate. You’re here to work.”

Few were expecting a win by Majewski, a political newcomer who spent just a few thousand dollars on TV ads — and his surprising upset is likely to further spook groups who are looking for dealmakers, or even just backbenchers willing to keep their heads down. He is backed by Rep. Paul Gosar (R-Ariz.), who has associated himself with known white nationalists and other far-right figures.

It was the first in a string of determinative primaries this month. McKinley and Mooney face off next Tuesday. The following week, Rep. Mike Simpson (R-Idaho) and Rep. Brian Fitzpatrick (R-Pa.) will stare down far-right challengers. In North Carolina, more establishment-oriented Republicans are hoping to oust Rep. Madison Cawthorn — a hardliner who has drawn a rash of unfavorable attention in recent weeks — and Cawthorn’s political acolyte Bo Hines, who is running in an open seat in the central region of the state.

In a special primary election in Minnesota to fill the seat of the late GOP Rep. Jim Hagedorn, the two front-running candidates are the establishment-backed former state Rep. Brad Finstad and state Rep. Jeremy Munson, who is endorsed by leaders of the House Freedom Caucus.

And that’s just in May.

“It’s the go-along-to-get-along crowd versus someone who’s going to join the House Freedom Caucus, and really try to hold the line and make a course correction in government, which is what I want to do,” said Munson, one of four state representatives who broke from the Minnesota state House GOP and created their own caucus. “I definitely have a record of standing up to leadership.”

The stakes in Washington are high: Republicans worry the party could face an extreme version of the internal gridlock that plagued them under former Speakers John Boehner and Paul Ryan.

“My fear is that in this election — not just my election, but across the country — is: We take the majority, but we don’t have a big enough majority and we end up like the Democrats are now, in reverse,” said Idaho’s Simpson, a self-described compromiser who faces a primary rematch with an ultraconservative 2014 challenger. “And we get pulled further and further right by the right wing. That’s damaging to us.”

“If you cannot ever compromise, you cannot govern,” Simpson continued, quoting 19th-century statesman Henry Clay, a former speaker of the House.

Defending Main Street, the political arm of the Republican Main Street Partnership, has spent some $370,000 on ads to aid Simpson, according to the ad-tracking firm AdImpact.

That group and the Chamber of Commerce — and, more rarely, the McCarthy-aligned super PAC, Congressional Leadership Fund — are often the vanguard of the “governing wing.” The Club for Growth and House Freedom Caucus, and sometimes Trump, tend to line up with hardliners. Though the groups and allies behind these two sets of Republicans differ in each race, they have collectively thrown millions behind different candidates into the May primaries.

And the fight will extend into the fall. Throughout the summer, Reps. Peter Meijer (R-Mich.), Dan Newhouse (R-Wash.) and Jaime Herrera Beutler (R-Wash.) — all of whom voted to impeach Trump — will face more conservative opponents backed by the former president. A loss by any of them would be a blow to the GOP establishment.

But because it’s harder to oust an incumbent, open seats might pose a more enduring threat to those trying to rein in the growth of the bomb-throwing GOP bloc. Privately, some operatives are worried about two Republicans running for the seats currently occupied by retiring Florida Democratic Reps. Stephanie Murphy and Charlie Crist: state Rep. Anthony Sabatini and Anna Paulina Luna.

A few outspoken members can dominate the conversation on Capitol Hill — a phenomenon that has become increasingly apparent in recent years, heightening the impact of each individual primary. Conservative provocateur Rep. Lauren Boebert (R-Colo.), for example, upset the moderate Scott Tipton in a 2020 primary. In Georgia, Greene replaced the much less controversial Republican Tom Graves in 2020.

“As we go into the majority, we have to be able to govern this country,” said Sarah Chamberlain, the president of the Republican Main Street Partnership, a group that is working to elect “governing Republicans” who value pragmatism and compromise.

“And when Kevin takes over as speaker, they’re going to be working with him,” she said of McCarthy. “They’re not going to be that controversial. They’re just going to want to help the Republican agenda get through Congress.”

Chamberlain’s group — which is advised by former Rep. Greg Walden, a former chair of the House GOP’s campaign arm — has been working on a rebrand. Their goal is to be seen not as moderates, but as legislators who are conservative but also pragmatic.

Crenshaw — who certainly could not be described as moderate — recently joined the Republican Main Street Partnership. He emerged as a counterweight to antics of the House Freedom Caucus, when a video emerged of him referring to them grifters.

The Texas primaries were a resounding success for his wing of the party. Wesley Hunt, a favorite candidate of McCarthy, cruised to victory in a new deep red seat created in redistricting. In the race to replace retiring Rep. Kevin Brady, Luttrell crushed a challenge from Christian Collins, a candidate backed by Cawthorn and Greene.

And in a major symbolic win, Nathaniel Moran, a candidate aligned with the Main Street groups, prevailed in the open-seat primary to replace Rep. Louie Gohmert, a longtime House firebrand who made a failed bid for Texas attorney general.