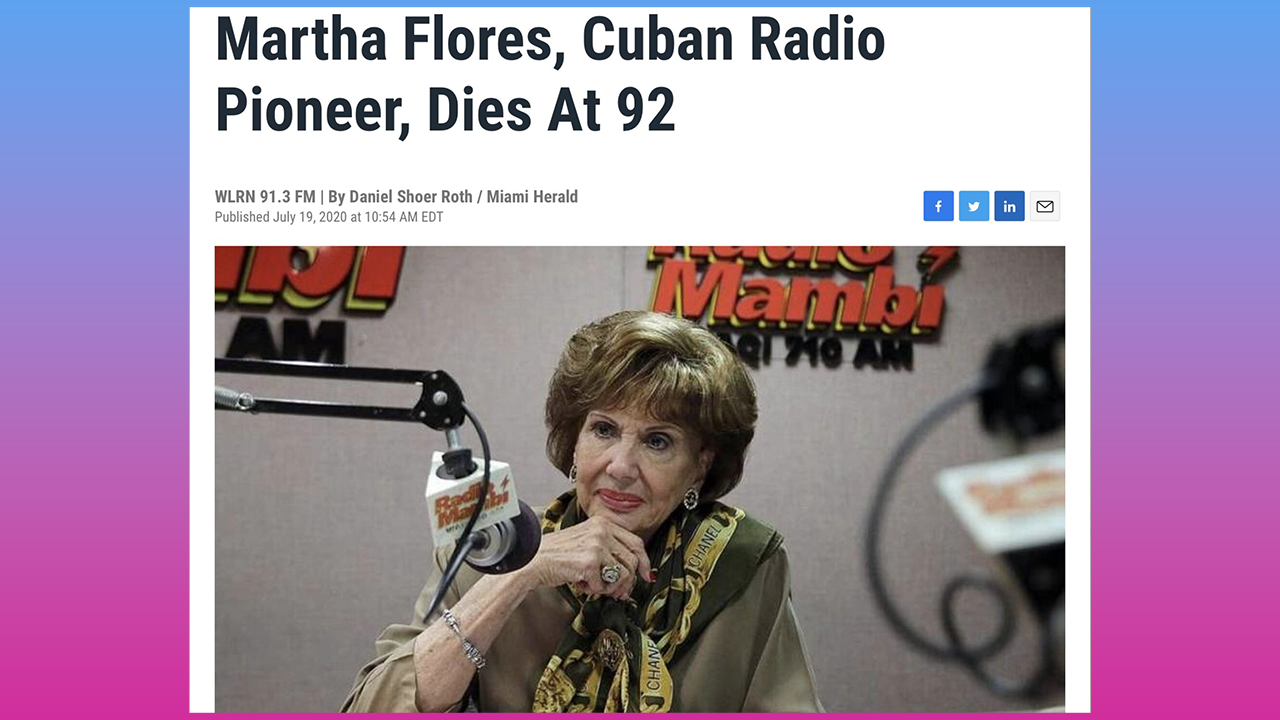 AP reported that they recently talked to Miami radio host Martha Flores even though she died in 2020.

The Associated Press published a report Thursday about Miami conservative radio hosts objecting to the Democratic Party’s push to buy up Spanish radio stations in the area, and somehow featured a recent interview with a famous radio host who actually died in 2020.

The outlet confirmed the apparent discrepancy with a correction to its article two days after it was first published.

According to conservative commentator Giancarlo Sopo — who shared screenshots of the article prior to the correction on Twitter — AP claimed it had interviewed famous Miami radio host Martha Flores for the article and said her radio station was one of those that would be purchased in Democrat-backed deal.

Though as Sopo tweeted — and The Associated Press later acknowledged — Flores died some time ago.

Associated Press issued a correction after incorrectly attributing a recent quote to a deceased radio host.

Sopo tweeted, “I’m so confused by this article. The AP says it interviewed Miami Radio host Martha Flores on Wednesday, but she’s been dead for two years. How the hell did they pull this off? Séance? An ouija board? Did they hire a babalawo to talk to her?”

In the initial version of the article, the AP featured a quote they attributed to Flores, who allegedly complained about the Democratic buy-up of Spanish radio.

AP wrote, “Martha Flores, who hosts an evening show on Radio Mambi, isn’t sure about that. She attended the news conference but declined to speak.”

It continued: “‘Look at this,’ Flores said, pointing at her eyes watering. I know I would just cry.'”

Sopo’s follow-up tweet asserted this interview could not have happened. He shared a screenshot of an article from July 19, 2020, which reported, “Martha Flores, Cuban Radio Pioneer, Dies at 92.”

AP had to issue a correction in their recent story about the Hispanic radio industry in Miami, Florida.
(Billy Black for Hylas)

Sopo added, “Context: Martha Flores was considered Miami’s ‘Queen of Radio.’ She was a pioneer of Spanish talk radio and died two years ago at the age of 92. It was widely reported at the time.”

“All I’m going to say is that if you saw Martha at a press conference this week, don’t call your editor. Call these guys… ” he tweeted, adding a GIF of the characters from “Ghostbusters.”

Confirming Sopo’s tweets, the AP issued a correction to its original article on Saturday.

It stated: “This story was first published on June 9, 2022. It was updated on June 11, 2022 to remove comments erroneously attributed to Martha Flores, former host of a show on Radio Mambi in Miami, one of the stations in the proposed deal.”

The correction added, “Flores died in 2020. The comments were made by another woman. This version of the story removes those comments.”

Sopo acknowledged the correction in his thread and added, “While this is very funny, in fairness to the reporter, I can understand how this confusion occurred. Martha’s hairstyle was common among Cuban women of her generation. I can see how someone may confuse one of her contemporaries for her at an event like this. Still funny.”