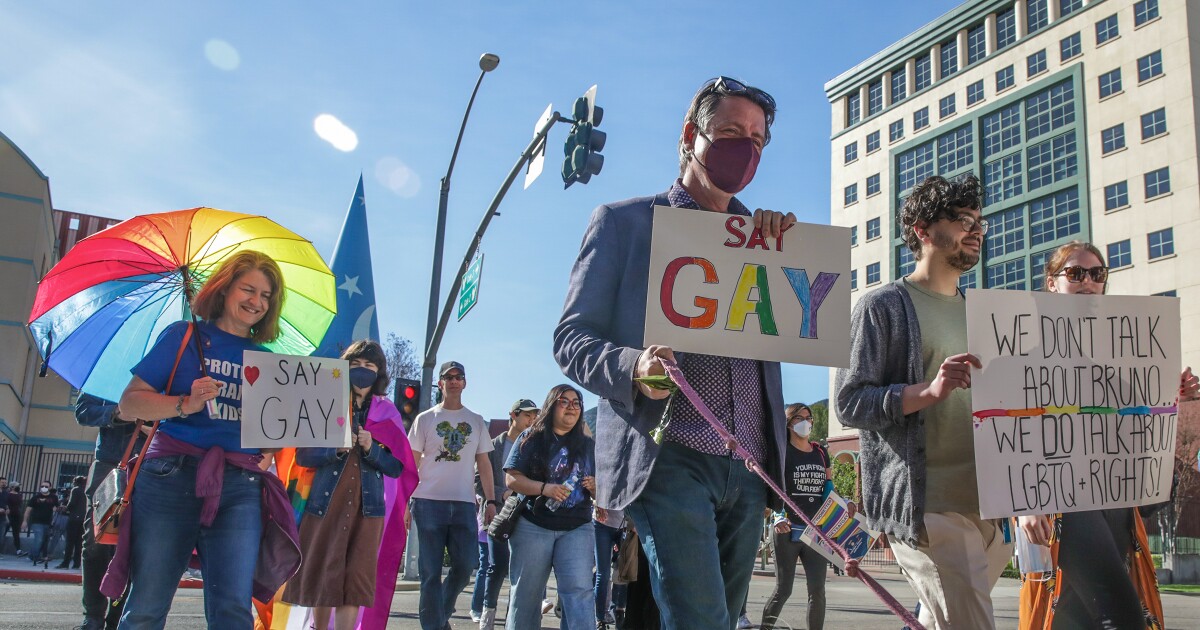 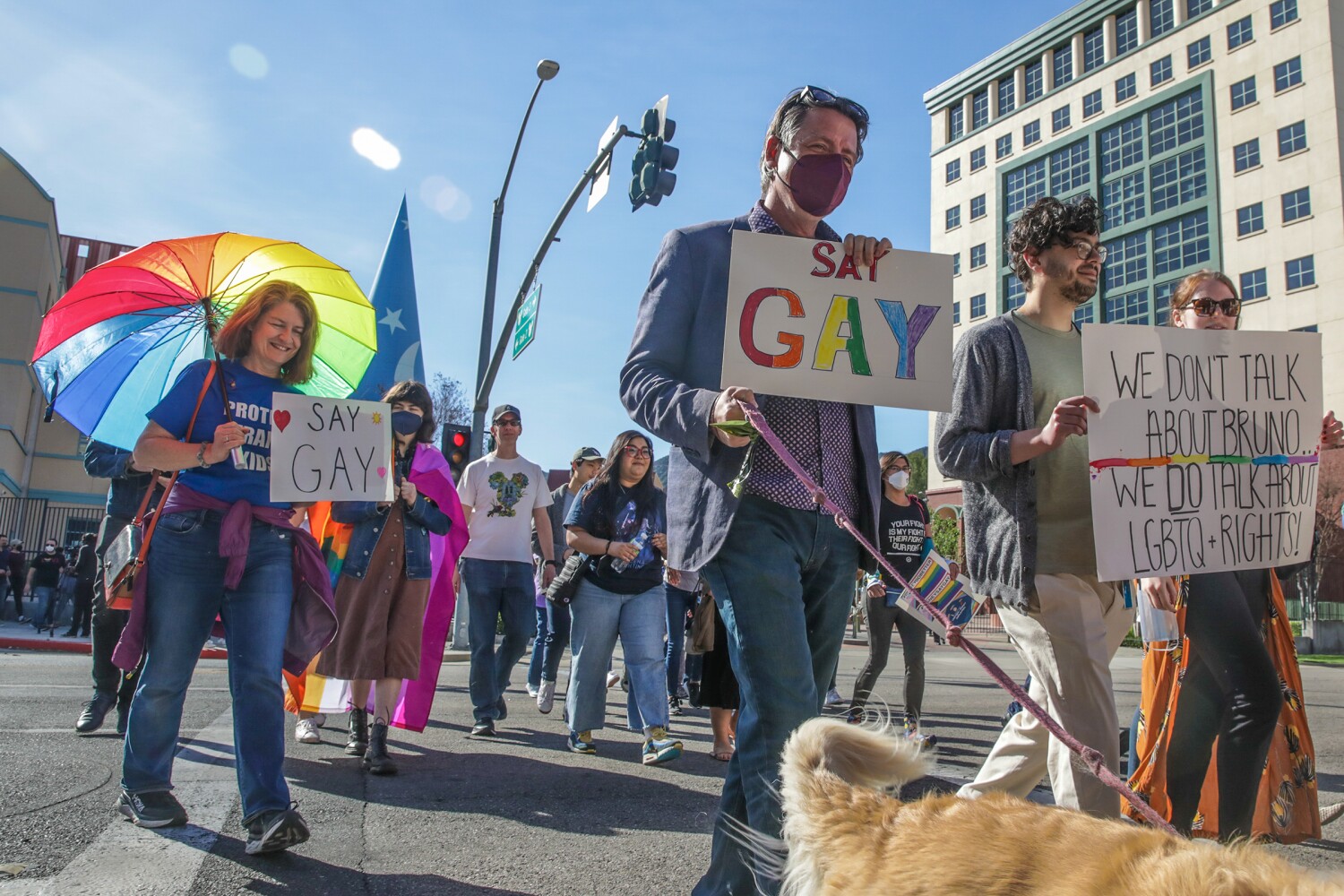 Gay, lesbian, bisexual and transgender Californians have watched with alarm and sadness in recent weeks as lawmakers in the Midwest and South have debated the rights of LGBTQ people within their borders.

Among the issues: whether transgender children can play in youth sports leagues or on high school teams, whether teachers can discuss same-sex relationships in the classroom and whether parents who help their children seek gender-affirming care will be investigated for abuse.

For many, the debates feel deflating and jarring after years of apparent progress. They fear that the rhetoric and legislation will continue to barrel forward across the country, leading to a clawback of important protections.

“Visibility is a double-edged sword,” said Madin Lopez, founder of the nonprofit ProjectQ, which gives free haircuts to unhoused LGBTQ youths in Los Angeles. “The more we show ourselves and stand tall and proud in who we are, the opposition has a direction to point in when they want to say there’s something wrong. The louder we get, the louder they get.”

For Robert Gamboa, a gay man who serves as policy advocacy manager of the Los Angeles LGBT Center, the proposed bills send a clear message: “I can’t go home in the same way.”

Born and raised in Texas, Gamboa took a road trip through his home state and other parts of the South during the COVID-19 pandemic. The 45-year-old often wore T-shirts with rainbows or messages of gay pride, sparking the occasional compliment from a clerk at a gas station.

But that, he said, “was before this rash of bills.”

Now he worries about what might be coming, particularly with a 6-3 conservative majority on the U.S. Supreme Court.

“The real fear for me is, how far are they going to take this?” Gamboa said. “Our uphill battle is just getting steeper by the day.”

A Florida bill signed last month by Republican Gov. Ron DeSantis forbids classroom instruction on sexual orientation and gender identity in kindergarten through third grade. Dubbed the “Don’t Say Gay” bill, it has drawn the ire of critics who say it marginalizes LGBTQ people. It also sparked a weeks-long feud between DeSantis and Walt Disney Co.

In Tennessee, legislators passed a bill that would pull funding from school districts that allow transgender students to play on girls sports teams.

And in Texas, Republican Gov. Greg Abbott has directed state employees to open child abuse investigations into families that provide gender-affirming care to their trans children.

The legislative debates have coincided with a rise in attempts to restrict access to books that discuss sexuality and gender identity. The American Library Assn. documented 729 challenges to library and school reading materials last year, targeting 1,597 books — a 93% increase over two years.

Among the books that are most often censored, half contain LGBTQ content, the ALA’s analysis found. That trend is alarming, because it’s “not just a one-off,” said John Szabo, the Los Angeles city librarian.

“It feels like we’re taking steps backward, and such silly steps too,” Szabo said. “The idea that someone wouldn’t want books on LGBTQ topics is ridiculous, when LGBTQ Americans are everywhere, including running the Los Angeles Public Library.”

Some of the furor recalls the moral panic of the “Save Our Children” campaign of the 1970s, Szabo said. That effort by singer and orange juice spokeswoman Anita Bryant to overturn a law in Dade County, Fla., banning discrimination based on sexual orientation helped to galvanize the modern gay rights movement.

The new legislation, especially bills targeting gender-affirming care, has brought back feelings of being a queer kid of color in a small town in Tennessee, said Jessica-Jean de la Vega, general manager for youth services at ProjectQ.

“Now I’m thinking about all the queer kids that are where I was,” said De la Vega, who identifies as “nonbinary femme of center” and uses the pronouns they and she.

De la Vega sometimes thinks that “if I don’t leave my bubble” in Los Angeles, “I’ll be OK.” But, they said, they worry about whether they would be safe if they visited their sister and nephews in Alabama.

A recent poll from the Trevor Project, a nonprofit suicide prevention group, found that the recent legislative debates have harmed the mental health of nearly two-thirds of LGBTQ children.

The message to transgender children, whether they live in Florida or California, is “that they don’t belong,” said Olivia Hunt, policy director at the National Center for Transgender Equality. They also may face social snubs and bullying from classmates who learn anti-trans talking points at home or in the media.

Regardless of where you live, “the impact of seeing your identity being debated or legislated on is really dehumanizing,” said Long Beach resident Jaden Fields, a transmasculine person.

Fields serves on the advisory board of Transmasculine Health Justice: LA, a project of Gender Justice LA. People who are transmasculine include trans men and nonbinary people whose gender is more masculine than the one they were assigned at birth.

Fields said he is preparing for an increase in the number of trans people moving to California to seek gender-affirming care or escape restrictive laws in other states. Many of them will need help accessing housing, medical care and other services, he said.

California has begun to position itself as a refuge for transgender youths and their families who are seeking access to gender-affirming care that they cannot get elsewhere.

Los Angeles County this month banned official travel to Texas and Florida because of their recently passed legislation. Palm Springs is developing a program that could provide direct cash assistance to transgender and nonbinary residents.

State Sen. Scott Wiener (D-San Francisco) said he plans to introduce a bill to enhance protections for transgender kids in California. If approved, the bill would render unenforceable any out-of-state court judgments seeking to remove children from their parents’ custody because they had received transgender medical care.

Although California has a relatively high number of protections for gender-nonconforming people, queer and trans people still face prejudice within its borders.

People sometimes walk into the ProjectQ salon in East Hollywood and hurl slurs at the hairstylists, Lopez said.

Data suggest that trans youths seeking refuge in California face a high likelihood of being unhoused. Between 20% and 40% of homeless children and teens identify as LGBTQ, compared with 4% to 10% of the total youth population.

And Bamby Salcedo, president and chief executive of the [email protected] Coalition, said she has never felt safe as a transgender woman, even in L.A.: “Many of us don’t feel safe walking down the street, getting on the bus, simply because of the constant verbal abuse and physical abuse that we experience.”

Though California may feel safe from legislation brewing elsewhere, what’s happening in Florida could quickly have national impact if politicians like DeSantis with presidential aspirations continue to push anti-LGBTQ legislation, said Brandon Wolf, press secretary at Equality Florida. Already, copycat bills are showing up in other states.

Will Larkins, a nonbinary high school student who advocated against the Florida bill, grew up in Newport Beach before moving with his family to Winter Park, Fla., north of Orlando. Larkins, who uses they and he pronouns, was never fearful about being queer in California, he said, but the outright homophobia he experienced from classmates in Florida was “really bad.”

He said he hopes that by advocating and speaking up, other students will become politically active and protest anti-LGBTQ legislation.

“Florida is much more like California than people realize,” Larkins said.

Heidi Shink, a longtime LGBTQ advocate and West Hollywood resident, argues that what happens in Florida affects Californians, despite the distance and opposite politics, because the rhetoric “spreads like wildfire.”

“Ultimately we have to be ever vigilant, ever persistent and never let our guard down,” said Shink, who is a lesbian. “In the times when we as a community are enjoying some of the hard-won victories, you have to realize the pendulum will swing as it is now. You’re never really standing on a strong foundation.”

A cruel irony about the recent spate of anti-trans bills is that they follow a period of unprecedented improvement in the lives of trans and nonbinary Americans, said ProjectQ’s Lopez, who is nonbinary and uses they/them pronouns.

They cited the example of having an “X” on their California driver’s license — and more recently, on their U.S. passport — instead of choosing male or female. In 2019, the World Health Organization stopped classifying transgender people as having a mental disorder.

But, they said, they believe the legislative pendulum will swing back in favor of trans people.

“They’re creating a generation of trans youth who are coming into their identities angry instead of joyful,” Lopez said. “And there will be more people to fight this opposition. That’s my hope.”