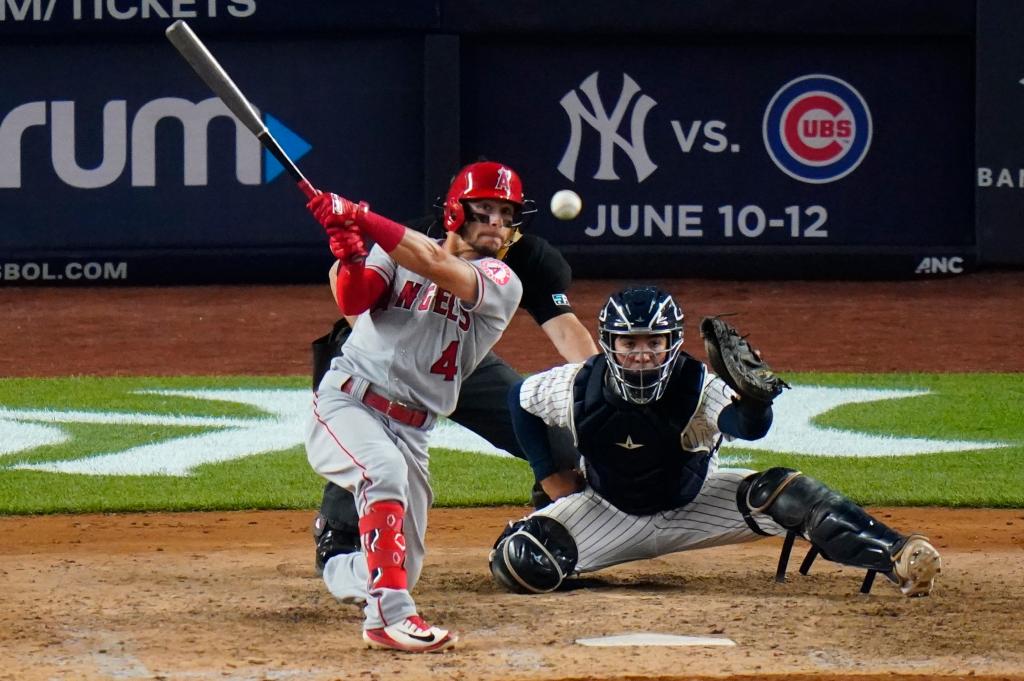 Andrew Velazquez quickly became a fan favorite in The Bronx last year as the hometown kid making good on his chance with the Yankees.

But the shortstop may be even more adored by his new team.

When the Angels flew to New York for their series against the Yankees, the theme on the flight was “Dress like Squid,” using Velazquez’s nickname. And when they took the field for batting practice on Tuesday afternoon, many of them did so wearing T-shirts that on the front showed a squid wearing a glove on every arm and on the back read, “70 percent of the world is covered by water. The rest is covered by Squid.”

The defensive whiz has made that kind of an impression on his new teammates and staff in just 41 games, even after starting the season at Triple-A.

“The best shortstop in the American League [right now],” Angels manager Joe Maddon said Tuesday at Yankee Stadium. “I saw him last year, [but] I didn’t get a chance to see it enough.

The Yankees saw it last season when they got a shot in the arm by calling up Velazquez in August when Gleyer Torres was hurt. The Fordham Prep grad showed off his slick hands — and even came through with some timely hits — in just 28 games in pinstripes before earning a start in the AL wild-card game.

But the Yankees waived him in November, cutting his homecoming short because they needed to open a spot on their crowded 40-man roster.

“I’ve been around long enough to know the business side of it is kind of unpredictable,” Velazquez said. “I’m also self-aware so I saw they had like 60 guys on the roster and the guys that were coming back. So I’m not surprised. I enjoyed it here. No animosity or nothing. I loved it and soaked up the experience.”

Velazquez, who said he got “recharged” by the energy being back in New York, has been one of the most valuable Angels on a team full of stars so far this season. Entering Tuesday, his six Outs Above Average (per Baseball Savant) were the best of any MLB shortstop and his 1.1 WAR (per Baseball Reference) was sixth-best on the Angels.

When Velazquez made a rare error recently, Duffy joked that the ball should be sent to Cooperstown.

“He’s just a really good ballplayer,” Duffy said. “I think there’s more in him than what has been allowed to be shown up to this point in his career. Not a guy I’d be surprised about going forward if people start hearing his name a little more.”

Velazquez didn’t take long to become a household name in The Bronx last season, but the Yankees opted to turn elsewhere to address shortstop. Instead of pursuing any of the star free agents, they traded for Isiah Kiner-Falefa, another defense-first shortstop who entered Tuesday with minus-1 Outs Above Average but a better offensive profile. Velazquez was batting just .202 with a 58 OPS-plus, though Duffy and Maddon both noted how hard he has been hitting the ball, especially of late.

“He could never get any hits and it would be worth it,” Duffy said.

As for dressing like Velazquez? Maddon just reached into his closet.

“I had a groovy coat that I knew he would like because it came out of my own closet,” Maddon said. “Same thing with my white leather desert boots that I know could have been in his closet, too. Peace and Love shirt under the jacket. And some khakis because I know he went to Fordham Prep.”