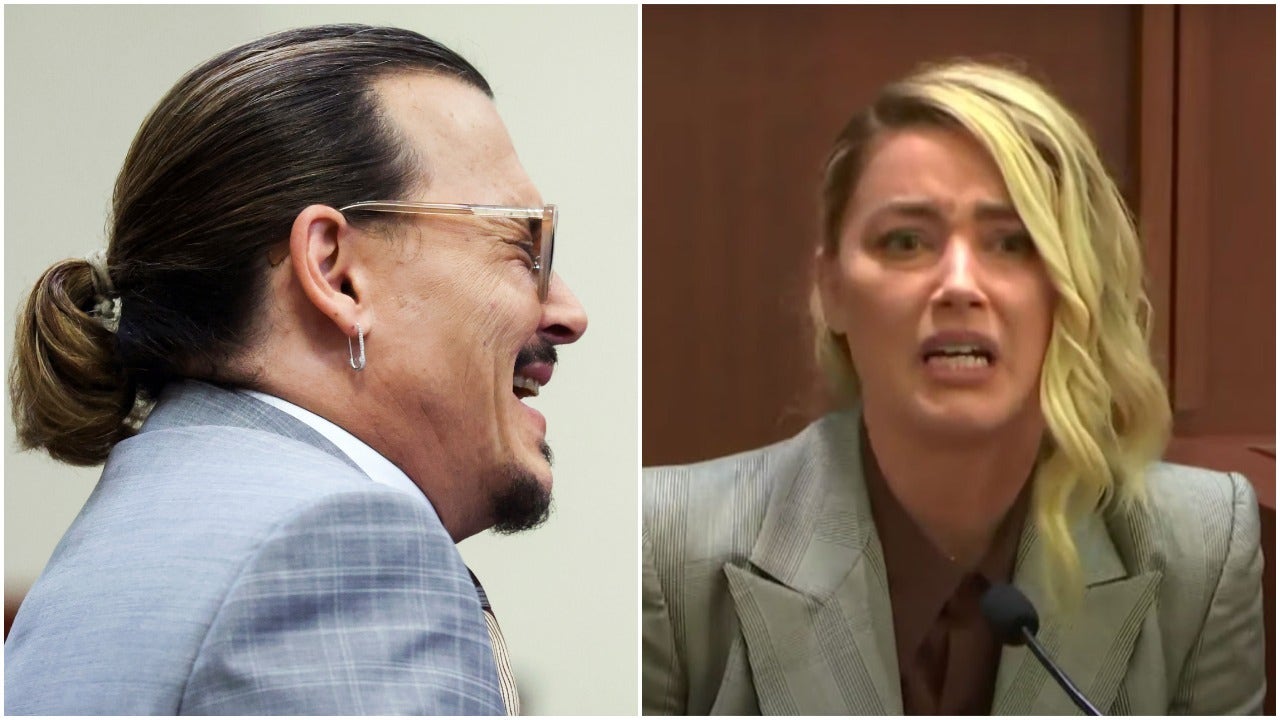 Amber Heard retook the witness stand on Thursday and told jurors in emotional testimony that Johnny Depp fans had threatened to “microwave her baby.”

Heard has a 1-year-old daughter, Oonagh Paige Heard, that the actress had via surrogate. She has never disclosed the identity of the biological father or sperm donor, but has said that she is both “mom and dad” to her child.

A photo combination of Johnny Depp and Amber Heard in Fairfax County Circuit Court, in Virginia, May 26, 2022.
(Michael Reynolds/Pool via Reuters)

“I am harassed, humiliated, threatened every single day,” she continued, her lower lip trembling. “Even just walking into this courtroom, sitting here in front of the world, having the worst parts of my life, things that I lived through, used to humiliate me.”

The actress, wearing a gray suit, said not only does she have to live with the trauma she suffered from alleged physical and sexual abuse but must endure constant ridicule online.

“People mocking –  mocking, mocking my testimony about being assaulted,” she said.

“I have a right as an American to talk about what happened to me, to own my story and my truth, I have the right,” said Heard, her face twisted with emotion.

In a dig at Depp, she said she’s not making light of the proceedings. “I’m not sitting in the courtroom, snickering, laughing, smiling, making snide jokes,” she said. “This is horrible, this is painful and this is humiliating for any human being to go through.”

On cross-examination, Depp’s lawyer Camille Vasquez grilled Heard, confronting her with the testimony of rebuttal witnesses who had contradicted her.

“Your lies have been exposed to the world multiple times,” Vasquez said.

“I haven’t lied about anything,” Heard defiantly replied, as she stared at the jury.

Vasquez asked Heard about an incident at the Hicksville Trailer Palace in 2013, where the actress alleges Depp threatened to break the wrist of a woman who had been too friendly with her. Later that night, Heard said that Depp sexually assaulted her, performing a “cavity search” on her, and trashed their trailer in drug-fueled rage.

But an 11th-hour witness, Morgan Night, the former owner of the luxury trailer park in Joshua Tree, California, contacted Depp’s team. He told jurors that it was Heard who was upset that night, not Depp, and that the trailer wasn’t wrecked. A single light sconce was broken, he testified.

Heard claimed Night wasn’t present for the altercation and insinuated that he wasn’t being truthful.

“I’m just saying he wasn’t there,” she responded sharply. Heard also insisted she had never tipped off TMZ to a story – despite testimony from former field producer Morgan Tremaine, who suggested she had.

A photo combination of Isaac Baruch on the stand and Johnny Depp in the courtroom at Depp’s defamation trial against ex-wife Amber Heard in Fairfax, Virginia.
(REUTERS/Evelyn Hockstein/Pool)

TMZ published a video that Heard filmed of Depp violently slamming cabinets – and Tremaine suggested she was the source for it.

“Another liar on the stand?” asked Vasquez.

“I just know that’s incorrect,” she shot back during the testy exchange.

“You didn’t expect Mr. Baruch to weep, to weep for Mr. Depp, after what you put him through?” asked Vasquez referring to Isaac Baruch, a friend of Depp, who sobbed when he testified that the actor never abused his then-wife.

“I relate to Isaac because he and I are the only ones who cried on the stand,” she said.

Vasquez continued to run through all the other witnesses who challenged Heard’s version of events – many of whom have no direct connection to Depp.

“He is a very powerful man and people love currying favor with a powerful man,” Heard replied.

She was the final witness, capping off six weeks of testimony in the sensational case that began April 11.

Summations are scheduled for Friday morning and jurors are expected to begin deliberations by the afternoon.

Depp is suing Heard for $50 million over an op-ed she wrote, alleging that she was a victim of domestic abuse.

Heard is countersuing her ex-husband for $100 million, accusing him and his attorney of defaming her by calling her abuse allegations a hoax.