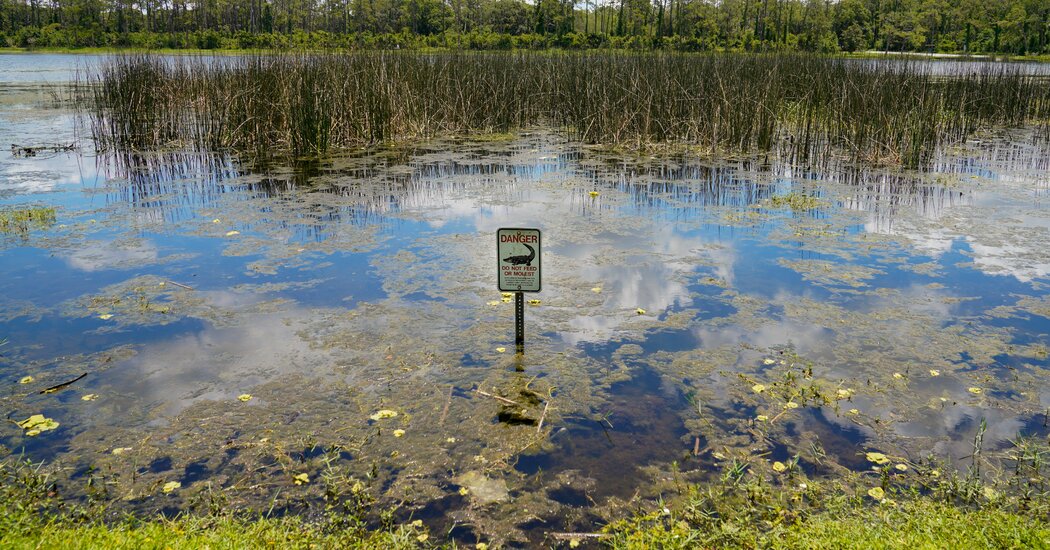 The body of a man who had been retrieving Frisbees from a Florida public park’s lake that serves as habitat for alligators was found with its arm torn off on Tuesday, the authorities said. It was the state’s first fatal alligator attack since 2019.

The episode occurred at a 53-acre lake in John S. Taylor Park of Largo, Fla., a spokesman for the Largo Police Department said. She added that police believed “a gator was involved” in the death.

A spokeswoman of the Florida Fish and Wildlife Conservation Commission identified the victim only as a 47-year-old man.

The man was a “transient” who made a living by selling the Frisbees to people who played disc golf at a course that runs parallel to the lake, and “he died as a result of an alligator attack,” Paul Cozzie, director of Parks and Conservation Resources in Pinellas County, said in a telephone interview.

“It appears that he went in before the park opened — unfortunately not a good time to be in any lake, but especially during alligator mating season,” Mr. Cozzie said, calling that decision “a mistake that appears to have cost him his life.”

Someone who was in the park around 8 a.m. saw the body on the bank of the lake with one of its arms severed, Mr. Cozzie said.

John S. Taylor Park features a disc golf course that runs alongside the lake. Park rangers had encountered the man trying to enter the lake in April, Mr. Cozzie said, and they told him that another attempt would get him banned from the park.

Local disc golfers eschew cheap supermarket Frisbees and prefer specialized discs designed to execute specific types of throws, making their equipment valuable, Mr. Cozzie said. The man on Tuesday was not the first person to be attacked by an alligator while trying to retrieve the discs for money, he said, adding that a couple of years ago a man had gotten bitten in the face by an alligator in the same lake, but survived.

The lake goes down six to eight feet, Mr. Cozzie said, so you have to “kick around on the bottom” to find discs.

One hole in the disc golf course is as close as 25 to 50 feet from the water, Mr. Cozzie said. “Certainly, it might be wise for the disc golf group to look at relocating the hole,” he added.

He described the lake as connected to other nearby bodies of water, making it “almost like a highway for alligators to move throughout the county.” There are signs warning people not to enter, and even park rangers cannot wade in the lake, Mr. Cozzie said.

During mating season, which occurs in May or June, alligators become more aggressive and territorial, Mr. Cozzie said. Alligators are most active between dusk and dawn, according to the wildlife commission, which said in a news release that an alligator trapper had been dispatched “to remove a nearby alligator” after the body was found.

Later on Tuesday, wildlife officials captured and euthanized an alligator near the site of the attack, according to WFLA-TV, an NBC affiliate in Tampa. A necropsy was to performed to determine if it was the alligator responsible for the man’s death.

It is more common for alligators to attack pets than it is for them to attack people, Mr. Cozzie said. According to wildlife commission data, over the last 10 years there was an annual average of eight “major” incidents of alligators biting people in Florida, leading to four deaths total.

The remains of a 47-year-old woman who had been walking her dogs were discovered inside an alligator in 2018, and an alligator snatched a 2-year-old boy at a Disney resort in 2016.

A population of around 1.3 million alligators may be found in “practically all fresh and brackish water bodies” in the state, the wildlife commission says. The group says that alligators are “naturally afraid of humans” but that feeding alligators, which is illegal, causes them to dangerously associate people with food.