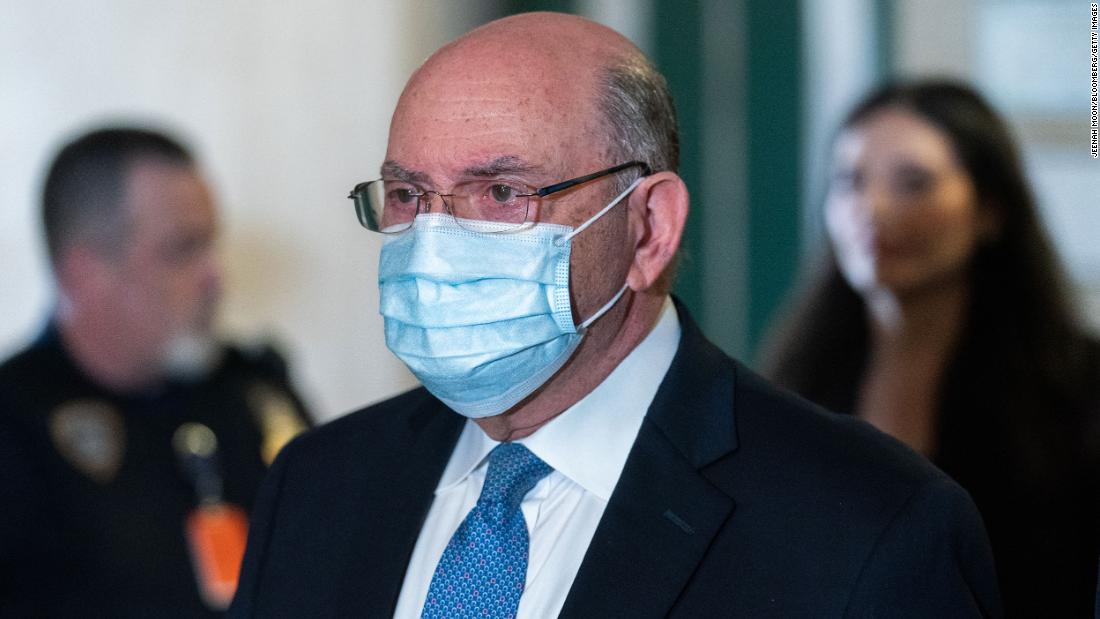 In court Thursday, Weisselberg said, “Yes, your honor” when asked if he was pleading guilty of his own choice.

Weisselberg pleaded guilty to 15 felonies and admitted he failed to pay taxes on $1.7 million in income, including luxury perks, such as rent and utilities for a Manhattan apartment, leases for a pair of Mercedes-Benz cars and private school tuition for his grandchildren.

He admitted to concealing those benefits from his accountant to under-report his income and knowingly omitting the income from his personal tax returns.

Weisselberg answered a series of specific questions about the scheme from the judge in a hushed and barely audible tone, saying “Yes, your honor” repeatedly.

As part of the deal, he will pay nearly $2 million in back taxes, interest and penalties and waive any right to appeal.

Judge Juan Merchan said Weisselberg would be sentenced after the Trump Organization’s trial. He said the agreement was for a five-month sentence to be followed by five years of probation. The judge warned Weisselberg if he does not meet all the conditions of the plea agreement, “I would be at liberty to impose any lawful sentence which in your case includes imprisonment from 5 to 15 years.”

The plea puts him at odds with the Trump Organization, where he worked for 40 years, and his testimony could damage the company, if it goes to trial on related tax charges as scheduled in October.

Weisselberg has been fiercely loyal to the Trump family, having worked for them since 1973. Yet even by providing testimony against the company Weisselberg will not implicate any Trump family members, who were not accused of any wrongdoing. If the Trump Organization is convicted, it could be required to pay back taxes and fines, but no individual will go to prison.

Weisselberg will likely serve at Rikers Island, New York City’s notorious jail. With credit given for good behavior, one-third of the sentence could be knocked off, meaning Weisselberg could end up serving about 100 days behind bars. None of the charges facing Weisselberg have mandatory incarceration but the most serious of the charges has a maximum sentence of 15 years.

Prosecutor Joshua Steinglass said during the hearing that if Weisselberg fails to meet all of the obligations, they will recommend a sentence in state prison.

The Manhattan district attorney’s office announced the tax charges last summer as it put pressure on Weisselberg to cooperate against Trump in the wide-ranging investigation into whether the Trump Organization and its top executives provided misleading financial statements to obtain loans, insurance and tax benefits. No charges have been brought in that investigation, which prosecutors say is continuing.

Weisselberg is not cooperating with New York prosecutors in that criminal investigation.

The guilty plea comes two months before Weisselberg was set to go to trial and one week after a New York state judge denied his motion to dismiss the indictment.

Representatives for the Trump Organization have denied any wrongdoing. Trump has called the investigations politically motivated. No other executive was indicted in the tax case and Trump, Donald Trump Jr., Eric Trump and Ivanka Trump were not accused of any wrongdoing.

There are few people, including Weisselberg, who could explain how decisions were made in the Trump Organization, and his testimony will provide insights at trial.

Weisselberg acknowledged Thursday that the scheme was carried out with Jeffrey McConney, the longtime controller of the Trump Organization.

McConney, who reported to Weisselberg, received immunity for his testimony before the grand jury, people familiar with the matter previously told CNN. He was named as an unindicted co-conspirator in the indictment.

Weisselberg’s guilty plea comes during a dramatic legal period for Trump, who last week at a deposition in the New York attorney general’s civil investigation, asserted his Fifth Amendment right and declined to answer hundreds of questions about the Trump Organization’s financial statements.
That came two days after the FBI executed a search warrant on Trump’s private Mar-a-lago residence in Florida, as part of a criminal investigation into the handling of presidential records, including classified documents.

This story has been updated with additional developments.