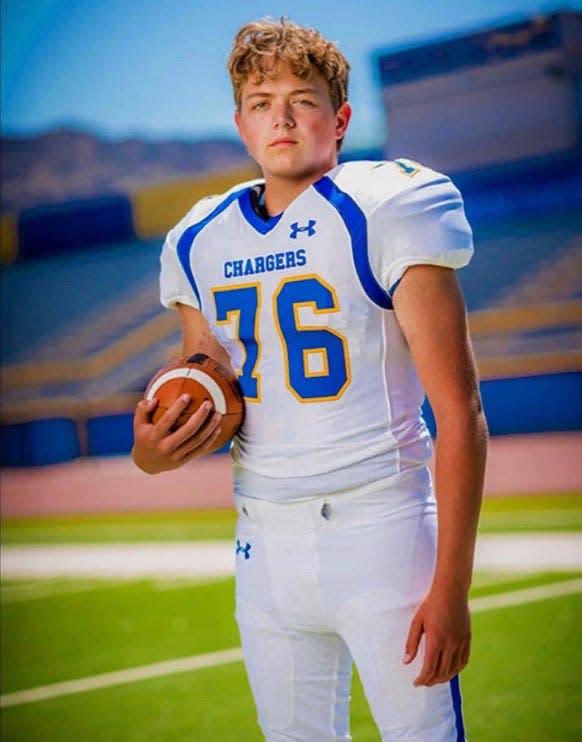 Editor’s note: This story has been corrected. Carter Stone’s procedure took place at an outpatient surgical center in Westlake Village.

The 15-year-old freshman had his first day of high school on Wednesday. The next day, he missed classes to have arthroscopic surgery on his shoulder at an outpatient surgical center in Westlake Village. When complications arose, he was transported to the emergency room at Los Robles Regional Medical Center in Thousand Oaks.

But the young offensive guard never made it back to his football team for Friday’s game at Ventura.

Stone died Thursday night after being airlifted to Children’s Hospital Los Angeles due to complications from the surgery, later discovered to be a heart tumor related to an undiagnosed T-cell leukemia, according to Agoura High football coach Dustin Croick.

“It was unknown and undetected prior to the surgery,” said Croick. “He was a great kid.”

Stone started with the Chargers in June.

He was waking up early to train and attend the team’s summer workouts.

“Carter just loved it,” Croick said “He was all in on being a freshman football player. He was working his butt off.”

Stone missed Agoura’s season opener due to a shoulder injury suffered during training camp. Surgery was scheduled to solve the injury.

There was a moment of silence for Stone observed after the first quarter of the Agoura’s JV game Friday night at Ventura High and before the varsity game.

More: Ventura’s defense holds the line in win over Agoura, which loses star QB to injury

Both teams started their games with 10 players on the field, absent a right guard, which is the position Stone played.

“He loved it. That’s all (the family) kept saying yesterday,” Croick said. “How much he felt like he was part of the team.”