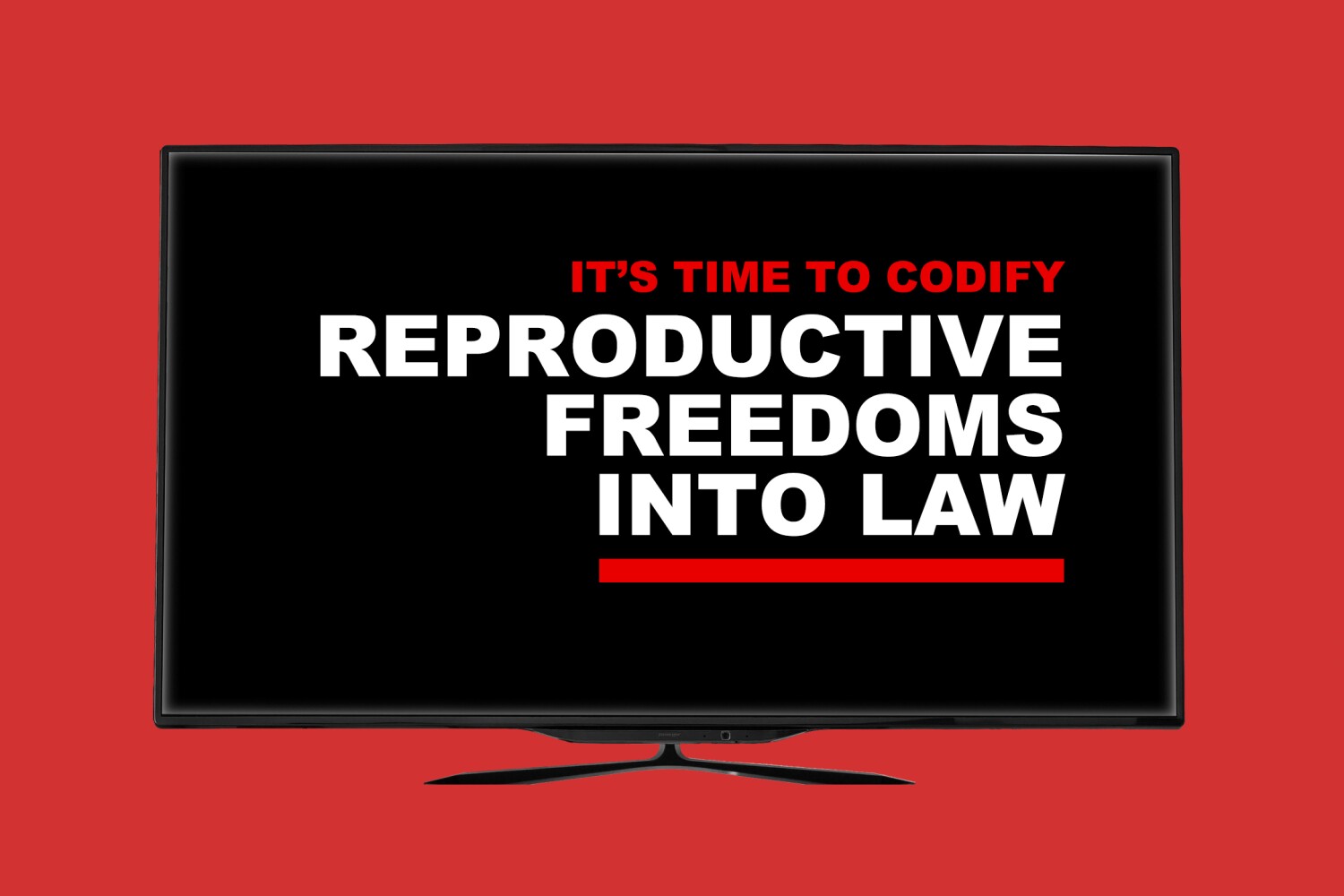 The anticipated overturning of Roe vs. Wade quickly became the focus of political ads coast to coast.

“A woman’s fundamental rights … hang in the balance,” a New Hampshire senator warns.

A candidate for governor in Alabama accuses the incumbent of “aiding and abetting murder.”

“Our freedom is on the ballot,” exhorts an ad in support of a Texas congressional candidate.

A California congressional candidate pledged, “We will not go back to women dying.”

In the aftermath of the leaked Supreme Court draft opinion that would end federal protection for abortion, politicians on both sides of the aisle and interest groups have spent more than $3 million on ads that ran on television or appeared on social media to fire up voters. They have also placed ads on Google and other websites; the total amount of digital spending is unknown.

Scores of ads have aired more than 11,500 times on television since Politico reported on May 2 the draft opinion overturning the landmark 1973 decision that legalized abortion across the nation.

While campaigns always react to the news of the day, few strategists or political experts could recall a domestic development that had the potential to rattle elections as much as the end of Roe.

“It’s a big deal,” said California GOP political consultant Rob Stutzman. “Roe has been this dividing line, this organizing instrument for both political parties for 50 years. I don’t see anything quite this big when it comes to domestic” policy.

“If Roe is overturned, I think you could see unprecedented protests around the country, and hopefully that turns into electoral action,” she said.

She pointed to the 1992 election, which followed the ugly grilling of Anita Hill by senators over her allegations of sexual harassment by Clarence Thomas during his Supreme Court confirmation hearings the year before. The Supreme Court in 1992 upheld a woman’s right to have an abortion but also gave states more leeway to restrict access to the procedure.

“Those two events … motivated women to get involved in campaigns, give money, get out to vote,” Kapolczynski said. They led to what is now known as the “Year of the Woman” because four women were elected to the Senate, including California’s Boxer and Dianne Feinstein. That was the most ever in one year at the time.

Democrats and allies that support abortion rights, hoping for a similar wave of activism this year, have spent more money and focused more of their messaging on the likely overturning of Roe compared with GOP candidates and antiabortion organizations, according to AdImpact, a political ad tracking firm, and Meta’s Ad Library Report, which summarizes political advertising data on Facebook and Instagram.

Dan Schnur, who teaches political communication at USC and UC Berkeley, said the difference in emphasis probably points to GOP concerns about swing voters being put off by the notion of abortion being banned in roughly half the states.

“It’s pretty clear that Republicans don’t want to talk about this,” he said, noting that most GOP elected officials have spoken more about the leak of the draft opinion than the substance of it.

“Now they’re making the case that other issues will be more important in November. They may be right, but the lack of enthusiasm for talking about abortion makes it seem like they understand this isn’t going to help them very much with swing voters,” Schnur said. “Politics is pretty simple — when you think an issue helps you, you talk about it. When you think it hurts you, you change the subject.”

Polls consistently show a majority of American voters believe abortion should be legal in all or most circumstances, according to the Pew Research Center. However, the importance of the issue varies among different groups.

A CBS poll released Tuesday found that 63% of Americans said the expected ruling would have no effect on their enthusiasm about voting in this year’s elections. Among Americans who say overturning the ruling makes them more likely to vote, Democrats had a more than 2-to-1 voter advantage in the poll. Three-quarters of Republicans said the overturning of Roe would not increase the likelihood they would cast ballots, the poll showed.

California Gov. Gavin Newsom, who is expected to sail to reelection barring some massive polling error, is among the biggest spenders on abortion ads. Though California’s abortion laws are among the most liberal in the nation, his campaign aired a television ad about the ruling more than 400 times around the state on Monday, Tuesday and Wednesday, at a cost of more than $150,000, according to AdImpact.

“With reproductive freedom under attack, who can California women count on to defend our rights?” a woman says in the voiceover, before criticizing GOP rival Brian Dahle, a state senator, over his opposition to abortion rights. “Newsom will keep California at the forefront protecting and respecting women’s rights and women’s health.”

Dahle spokesman Josh F. W. Cook said Democrats were trying to distract voters from the state’s myriad problems despite the expected ruling having no impact on access to abortion in California.

“We have dead bodies on the street, we have underperforming schools, we have inflation that’s out of control,” Cook said. “People are unhappy.”

Republicans who are most vocal about ending abortion access appear to be from reliably conservative swaths of the nation.

Nebraska GOP gubernatorial candidate Brett Lindstrom, a moderate Republican who came in third in his party’s primary on Tuesday, tried to prove his conservative bona fides by airing a television spot saying that he, like many of his fellow Nebraskans, had “long prayed for the Supreme Court to overturn Roe vs. Wade.”

“I believe in the sanctity and dignity of every human being who God has created, and as governor I will never stop fighting to protect the unborn,” Lindstrom said in the ad. He began airing the spot on April 26 but sharply increased his ad buy after the leak of the draft ruling, according to AdImpact.

A spokesman for Lindstrom’s campaign did not respond to requests for comment.

It’s not just Republicans who are trying to use the issue in intraparty races.

Supporters of Texas congressional candidate Jessica Cisneros, who is challenging Rep. Henry Cuellar, a fellow Democrat, in a May 24 primary partly because of his opposition to abortion, ran ads on Google saying “our freedom is on the ballot.”

Many Democrats who have put up ads touting their support of abortion rights are in competitive inter-party races, including New Hampshire Sen. Maggie Hassan, who is in a tight reelection battle; Rep. Katie Porter, who was drawn into a much more competitive district in Orange County during redistricting; and former California Assemblywoman Christy Smith, who is making her third run against GOP Rep. Mike Garcia in an increasingly Democratic swath of northern Los Angeles County.

In a Facebook ad, Smith talks about her medically dangerous pregnancies. She began having seizures and went partially blind while carrying her first daughter, who was born more than a month early by emergency C-section to save Smith’s life. When she unexpectedly became pregnant a second time, she weighed having an abortion because of the potential of leaving her then 3-year-old daughter without a mother.

“The only people who had a right to be involved in that decision were me, my doctor and my God,” said Smith, who ultimately decided to continue with the pregnancy and gave birth to another girl. “I will be damned if I nearly died having both of them only to have them see the day they become second-class citizens.”

Garcia’s campaign did not provide a response.

In an interview, Smith predicted that the end of federal protection for abortion rights will have enormous consequences around the country.

“If what was leaked becomes reality and the court does in fact overturn Roe and the freedoms enjoyed by people for a half century, I think it will be huge in the midterms,” she said.