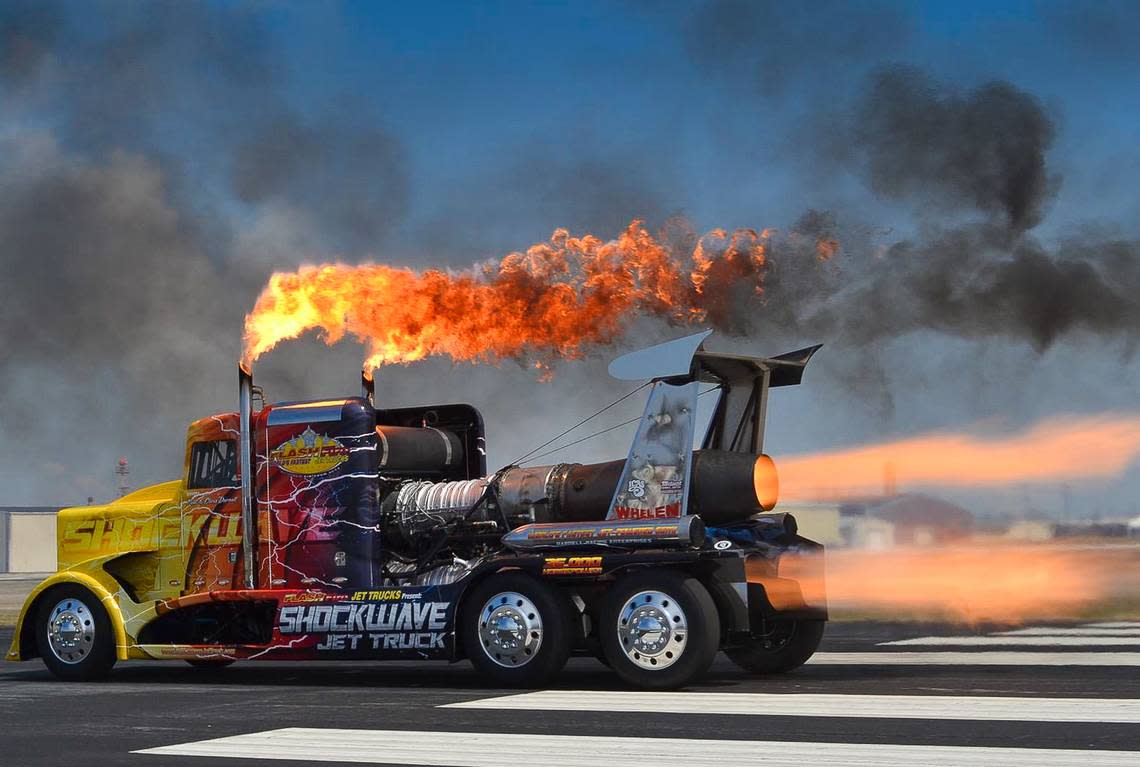 North Carolina has hosted its share of drag races and air shows over the years, and the Shockwave jet truck was one of the few attractions that fit perfectly well at both.

Shockwave was a novelty act. Three jet engines made it the fastest thing on wheels at most drag racing events, while at air shows it was often the only jet that never left the ground when it barreled down the runway at 300 mph or more.

The truck was racing two airplanes at the Battle Creek Field of Flight Air Show and Balloon Festival in Michigan on Saturday when it crashed. The driver, Chris Darnell, 40, of Springfield, Missouri, was killed. Darnell’s father, Neal, posted on Facebook that the truck had some sort of mechanical failure.

Widely shared videos of the crash show the truck spinning out and tumbling just after Darnell deployed a parachute to slow it down. The crash coincided with a pyrotechnics fireball on the airfield that was part of the show and did not come from the truck.

The Darnells have performed in the Shockwave since 2013, after they bought the truck from the man who built it, Les Shockley. The Darnells, who had been driving jet-powered vehicles before then, made Shockwave the center of their show.

Shockley built his first jet-powered dragster in the 1970s and wanted to take the concept further. He took a Peterbilt cab, removed the engine and the guts of the sleeping compartment and strapped on the three Pratt & Whitney jet engines.

Shockwave made its debut in June 1984 and was an instant hit, Shockley told me in an interview a decade later before an air show at the Norfolk Naval Air Station in Virginia.

“Everybody likes it. It’s something they can relate to,” he said. “Everyone sees trucks on the highway. They’ve just never seen one with 36,000 horsepower.”

Shockley said fighter pilots who had ridden in Shockwave told him the thrust felt like a plane taking off from an aircraft carrier. He routinely drove it over 300 mph and once topped out at 376 mph, a record for a semi truck.

Shockwave had two bucket seats, surrounded by heavy roll bars, and Shockley often had a guest along. As a reporter for The Daily Press in Newport News, I got to ride alongside him as he demonstrated his jet truck for the press before the opening of the Azalea Festival Air Show in April 1994.

After signing the requisite waiver, I donned the same sort of thick fireproof suit that Shockley wore. He explained that the truck was equipped with a fire suppression system that smothered fires by sucking up all the oxygen and that it had three separate braking systems and four parachutes.

His wife, Donna, performed all the safety checks and followed Shockwave down the runway in a conventional truck.

‘’Like any act, it’s a lot safer than it looks,’‘ she told me. ‘‘That’s why the public comes out to air shows — to see something that looks dangerous.’‘

It’s hard to describe the sensation of accelerating to 275 mph then coming to a stop all in the length of a runway. I remember my peripheral vision disappearing as I was pushed back into the seat, then just as suddenly straining against the system of safety belts over my hips and chest. Shockley said we had topped out at 284 mph.

Les Shockley was 50 at the time. Two years later, he began passing the performing duties to his sons, Kent and Scott, before the family sold the truck and its name to the Darnells. Neal Darnell said his son loved performing at air shows.

“He was so well loved by everyone who knew him,” Darnell wrote on Facebook. “He was ‘Living the Dream,’ as he said.”

Appearances in North Carolina over the years included the Cherry Point Air Show at the Marine Corps Air Station near Havelock, the Wings Over Wayne air show at Seymour Johnson Air Force Base and at Rockingham Dragway.

Shockley told me the most harrowing run he ever had in Shockwave was when he hit 376 mph. The tires blew, the parachutes ripped and the truck’s front end rose off the ground, he said. He said he was still going 100 mph when he ran out of runway and had to spin the truck around in some gravel to stop.

But he walked away, as he always did. Shockley died from complications of a stroke in 2019 at age 75.