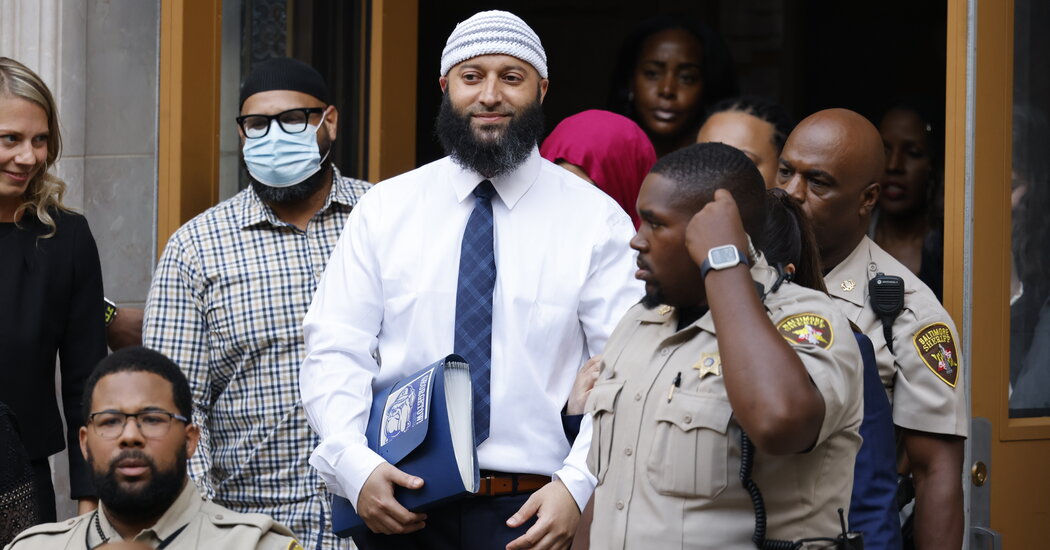 A judge in Baltimore overturned the murder conviction of Adnan Syed on Monday afternoon, after he spent 23 years behind bars. The popular “Serial” podcast in 2014 chronicled the case against him and opened up criticisms about its validity.

Mr. Syed has undergone a long legal battle for freedom while claiming his innocence. Last week, prosecutors asked a judge to overturn his conviction, saying “the state no longer has confidence in the integrity of the conviction” after a new investigation. The move was the latest step in a flurry of legal activity since the podcast questioned his conviction.

Here is a brief timeline of his case.

Hae Min Lee, 18, was killed by strangulation when she was a student at Woodlawn High School in Baltimore County, Md.

She disappeared after leaving the school, and her body was found nearly a month later buried in a park. A police investigation led to Mr. Syed, a fellow student who had dated Ms. Lee. He was arrested and pleaded not guilty.

Prosecutors relied heavily on the testimony by Jay Wilds, a friend of Mr. Syed’s who testified that he had helped Mr. Syed bury her body. They presented cellphone tower records that they said placed Mr. Syed near the park where Ms. Lee’s body was found.

A jury found Mr. Syed, who was 17 at the time of Ms. Lee’s death, guilty of murder, robbery, kidnapping and false imprisonment. He was sentenced to life in prison.

Over the course of 12 weekly episodes, the podcast revealed the existence of an alibi witness for Mr. Syed who said she was with him at a library when Ms. Lee was killed. The witness, Asia McClain, said she had been willing to testify, but Mr. Syed’s lawyer, Maria Cristina Gutierrez, did not contact her; Ms. Gutierrez was disbarred in 2001 after a series of client complaints emerged.

The series also questioned the credibility of the cellphone tower records, and revealed that physical evidence gathered in 1999 was never tested for Mr. Syed’s DNA.

The podcast was downloaded more than 100 million times in its first year, bringing widespread public attention to the case. It won a Peabody Award for its “compelling, drilling account of how guilt, truth and reality are decided.”

A judge grants a new trial.

In the hearings, Mr. Syed’s defense team argued that his original defense had been grossly negligent and presented the testimony of the alibi witness. The team also questioned why the original lawyer had not questioned the reliability of the cellphone tower records.

A judge in Maryland granted a new trial in June, and the state appealed the ruling. Ms. Lee’s family expressed pain and outrage at the decision to grant a new trial, saying that they “continue to believe justice was done when Mr. Syed was convicted of killing Hae.”

Lawyers asked for him to be released on bail; the motion was denied.

The Maryland Court of Special Appeals upheld the decision to grant Mr. Syed a new trial and vacated his conviction, agreeing that he had received ineffective legal counsel. He remained incarcerated.

Reversing the decision from 2018, Maryland’s highest court, the Court of Appeals, ruled in a 4-to-3 decision that while the original defense lawyer had been “deficient,” Mr. Syed was not “prejudiced” by that deficiency. It denied him a new trial and reinstated his conviction.

In November, the United States Supreme Court declined to hear his case.

A four-part HBO documentary beginning in March, “The Case Against Adnan Syed,” revealed that DNA tests performed at the request of Mr. Syed’s new lawyers did not find anyone else’s DNA on Ms. Lee’s body or belongings.

A request to overturn the conviction

In March, prosecutors agreed to new DNA testing, saying that it was merited because of advances in genetic profiling. A new Maryland law allowed prosecutors the discretion to modify sentences of offenders who were under 18 at the time of their crimes and had served at least 20 years in prison.

On Sept. 14, prosecutors asked a judge to overturn Mr. Syed’s conviction. They said an investigation had uncovered the potential involvement of two “alternative suspects,” key evidence that prosecutors might have failed to provide to Mr. Syed’s lawyers, and “significant reliability issues regarding the most critical pieces of evidence” presented at trial.

They asked that he be granted a new trial “at a minimum” and released on his own personal recognizance.

“After a nearly yearlong investigation reviewing the facts of this case, Syed deserves a new trial where he is adequately represented and the latest evidence can be presented,” Marilyn J. Mosby, the state’s attorney for Baltimore City, said in a statement.