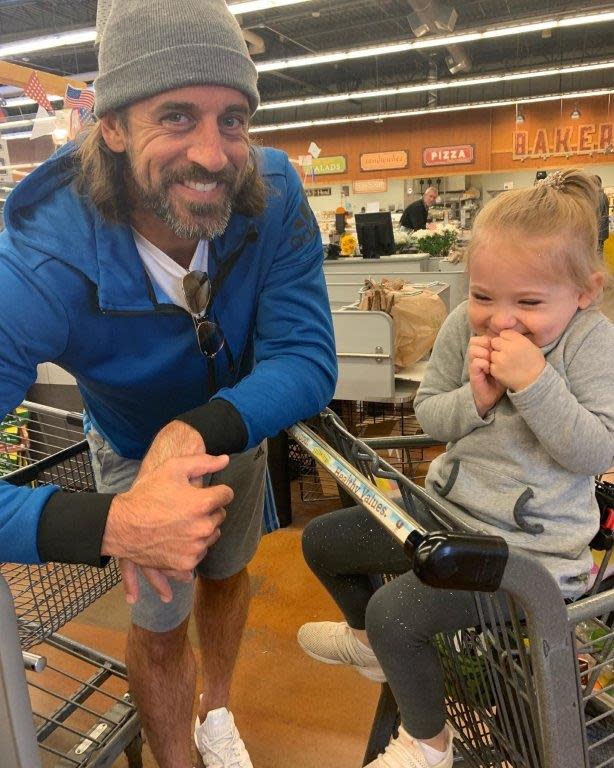 There’s not much fun about going to the grocery store these days, but if there’s one way to take the sting out of rising food prices, it’s a surprise cart encounter with Aaron Rodgers.

Alyssa Proffitt shared photos on Twitter on Tuesday of her young daughter delighted to bump into the Green Bay Packers quarterback at Fresh Thyme Farmers Market in Ashwaubenon. Just a couple of casual weekday shoppers in their sneakers — one in shorts and one in sparkly leggings — doing a little catching up.

Proffitt, whose tweet racked up more than 41,000 likes in its first 24 hours, wrote: “Debated whether or not to post these but I just can’t get over the joy this brought to my daughter. Thank you Aaron Rodgers she will never forget this.”

RELATED: Aaron Rodgers surprises Packers fans from nearby retirement home by sitting down with them at Scottsdale golf course

It’s the full trifecta of cuteness in the collage of photos. First, the shyness from the little girl, then the tiny wave and finally a giggle, like the two of them just shared a joke somewhere between the organic blueberries and bulk banana chips.

It’s not a stretch that Rodgers would be spotted at the store. In 2021, while entertaining the media with his love for Woodman’s Markets commercials, he also mentioned he likes to shop at Fresh Thyme, which specializes in healthy and organic groceries.

Proffitt and her daughter posed together for a follow-up tweet, each with a shared look of surprise on their face a la Macaulay Culkin from “Home Alone.”

“Our reaction to the reception this tweet is receiving,” Proffitt wrote. “We just really appreciate Aaron taking the time to talk with us and being gracious enough to allow me to take pictures. She loves football and she recognized him right away. Forever thankful for this.”

Rodgers does have a reputation for having a soft spot for spontaneously connecting with kids. In 2017, a Green Bay Press-Gazette story about him chatting up a mom and her son (both Chicago Bears fans) in downtown Chicago went viral. In 2018, he made the day of two young brothers from Connecticut when he spotted them while in town for a charity golf outing.

Rodgers is in Green Bay this week for the Packers’ mandatory minicamp.

SUPPORT LOCAL JOURNALISM: Our subscribers make this coverage possible. Click to see the Green Bay Press Gazette’s special offers at greenbaypressgazette.com/subscribe and download our app on the App Store or Google Play.