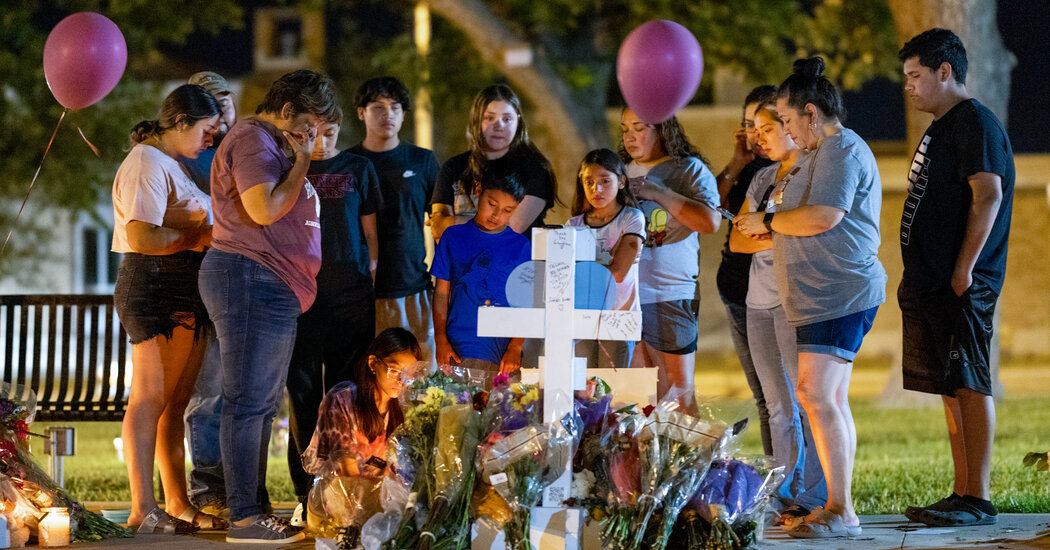 My colleague Jack Healy is in Uvalde, Texas, reporting on the school shooting that killed 19 children and two adults. He has talked to victims’ families about their grief and anger over police handling of the shooting.

I wanted to give you a sense of how people in Uvalde are processing the violence. So I called Jack.

What did you see when you first got to Uvalde?

I got here the morning after, and I started driving to the houses of the parents and grandparents of the kids who had perished.

This is a predominantly Latino town. A lot of the kids lived in multigenerational households, with grandparents and aunts and uncles and cousins. These kids lived next door or around the corner from family members, who often took them to school.

The day after, these family members were starting to gather to parse through what had happened — not even to make sense of it, but try to come to grips with the reality that 10-year-old kids had been taken from them.

There is no making sense of it.

Yeah. For many of them, it was like coming to terms with the fact that the last day hadn’t been some sort of horrible dream.

The process of getting the news was traumatic, too. Some families didn’t find out for almost 12 hours. They were getting conflicting information from social media, from people in the community.

There were two girls named Eliana — one spelled Eliahana — who were killed. There’s name confusion between the two for a minute that made them wonder which one was theirs or whether theirs really had been killed. It was chaos.

How was everyday life disrupted?

This shooting came a couple days before what would have been the end of the school year. These kids were on the glide path toward summer vacation. That day, they had an honor roll ceremony, and parents had been there, taking pictures of their kids who were overjoyed to get their certificates.

People were also gearing up for Memorial Day weekend. This is beautiful, hill-and-river country. People were making plans for barbecues or floats down the river or going to a cabin or camping.

You’ve probably heard things that will stick with you for years.

I talked with the grandpa of one of the girls who was killed, Eliahana Cruz Torres. He was her stepgrandpa. He and his wife, Eliahana’s biological grandma, had raised her since she was four. After she moved in with them, Eliahana frequently slept between grandma and grandpa because she didn’t want to sleep alone. She was squirmy in bed and would ask him to tickle her feet. She would say, “I love you, Grandpa.”

He said he broke down when she first called him Grandpa. It was one of the most touching and important things anyone had ever said to him.

There are 21 families across town telling stories like that now.

What are people doing to support each other?

Unfortunately, there is an established playbook for charities when mass shootings happen. The Red Cross is here. Southern Baptist volunteers have been praying on street corners. Starbucks in San Antonio sent workers because so many Starbucks employees here had been affected and had to be with their families.

There have also been smaller acts of kindness: family members bringing bottled water and toilet paper and food to people’s houses. Everyone knows they can’t fix this. But they do what they can. Frequently, that is just being present.

You wrote about the gun debate in Uvalde. In past shootings, survivors and others affected got involved in gun-control activism. Has that happened there?

That is a complicated question here. This is rural, southern Texas. Guns are woven into the politics and culture. Some people in town support the reflexive Republican position of needing more “good guys with guns,” despite the many problems with the police response. A lot of families are fed up and think that it’s unconscionable that an 18-year-old was able to buy two assault rifles. But it’s a quiet conversation.

Even from afar, covering these stories is difficult. Just looking at photos of these kids breaks my heart. How do you approach your reporting on the ground?

We don’t think enough as journalists, collectively, about what we do to these communities.

The school’s neighborhood is packed with television trucks and S.U.V.s and cars rented by journalists. There are blocks outside the school crammed with tents where TV reporters are doing their thing. It looks like a political convention.

Families have been getting constant calls and door knocks. A lot of them do want to share their stories and think it’s important that the world sees who their children were and what made them special. The first couple of times, people appreciate it. But after the 20th person knocks on your door, it can become another wound.

I don’t know what the solution is. There’s a lot of important journalism to do about these issues, about these families and these kids and the failings in response to the shooting. It’s really important to tell these stories.

More on Jack Healy: He got his first full-time journalism job as an intern at The Times before joining full time in 2008. He covered the war in Iraq and now works as a national correspondent based in Phoenix.