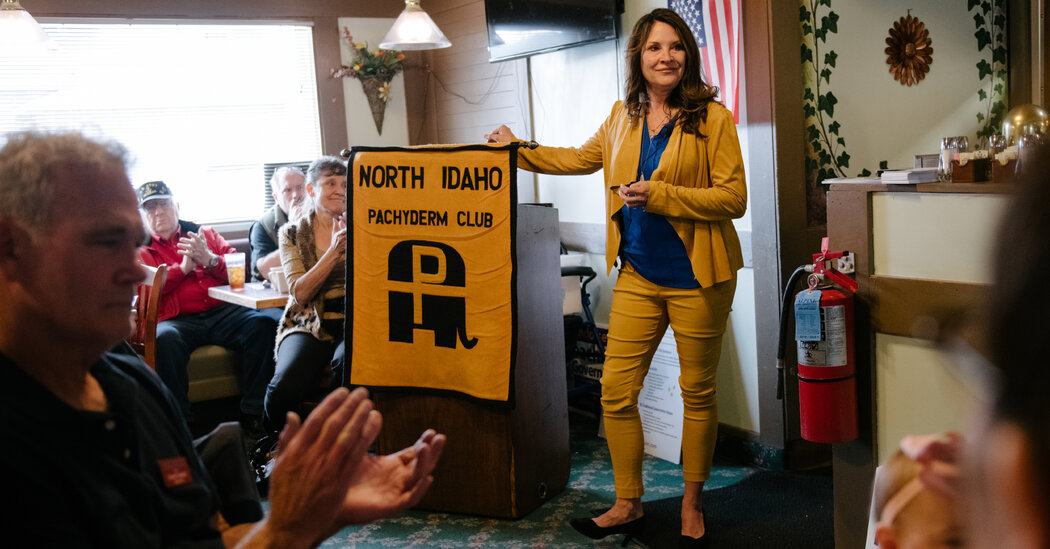 Eric Parker, who was also involved in the 2014 standoff and has founded a Three Percenters group in Idaho, is running for a State Senate seat. Meanwhile, Ammon Bundy, who led an armed takeover of an Oregon wildlife refuge in 2016, is also running for governor, but doing so as an independent after calling the current Republican Party “corrupt and wicked.”

At the event in Bonners Ferry, speakers decried the work of Republicans at the State Capitol.

Spencer Hutchings, a candidate for the State House, was the one who advocated making machine guns generally available. Scott Trotter, a candidate for U.S. Senate, promised to sing a Christian worship song on the floor of the chamber on his first day in office. Dorothy Moon, a candidate for secretary of state, called for Idaho, which has one of the nation’s highest concentrations of public lands, to reclaim control of them from the federal government.

State Representative Priscilla Giddings, who was censured by her colleagues after she publicly identified a state Capitol intern who reported being raped by a state lawmaker, is running for lieutenant governor against the State House Speaker, Scott Bedke, an anti-abortion, pro-gun constitutional conservative. Ms. Giddings ended her campaign speech at the Bonners Ferry forum with an ominous message, saying that if she did not win, people should “plant your gardens and keep buying ammo.”

Around northern Idaho, it is not hard to find people who worry about the future of the country and are prepared for the possibility of civil conflict.

Earl Borer, 72, who attended the Birch Society event, said he saw this year’s election as a make-or-break moment and added that people would need to pick up arms if the right conservatives did not get elected. In the governor’s race, he said he preferred Ms. McGeachin or Mr. Bundy and was leaning toward the latter.

The most important thing, as Mr. Borer saw it, was that Republican voters needed to oust Gov. Little.

“If we don’t get rid of him, then Idaho is no longer a paradise,” he said.