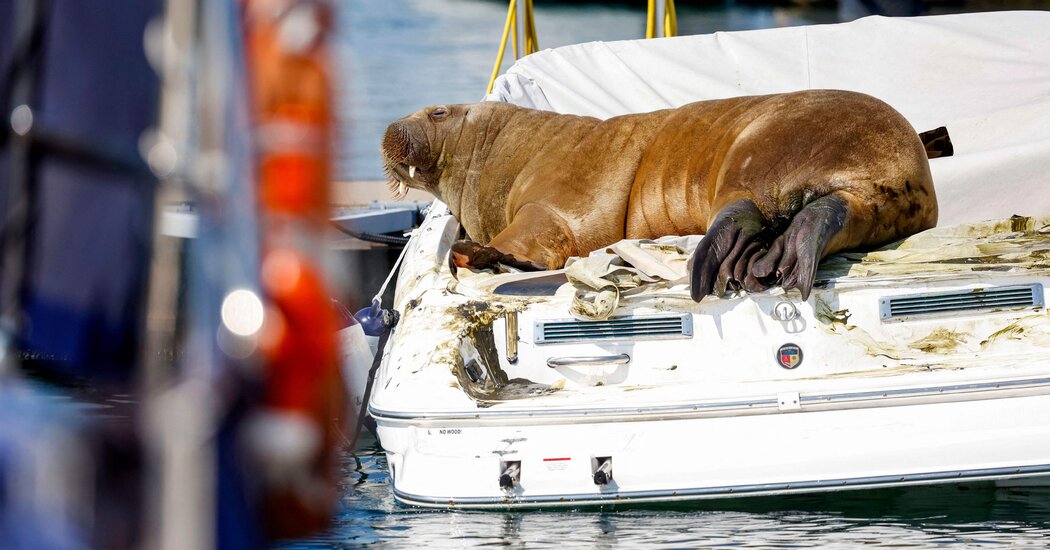 OSLO — It was another good day for Freya, the 1,300-pound walrus named for the Norse goddess of love, beauty and war, who had become a beloved and feel-good international media sensation, the frolicking mascot of the long Oslo summer.

She had spent the day, Aug. 13, diving from a boat moored to a busy marina pier, feasting on clams, and then resurfacing to snooze on the deck for hours at a time. Christian Ytteborg, 47, a marina worker who spotted her in the morning, had called authorities to help guard her.

Soon after, he said, a patrol boat filled with “four nice guys” from the Norwegian Directorate of Fisheries came to help. They ate mussels together and shared a laugh over a close-up video one of the men took of the walrus shimmying onto the boat that a teenage marina employee then scored to Louis Theroux rapping, “I’d like to see you wiggle, wiggle.”

But when night fell, and Freya was left alone, the Fishery professionals got to work. They executed Freya with what their boss, Frank Bakke-Jensen, a former Norwegian Defense Minister, later called “bullets that suit this mission.” They covered her body in a tarp, cut the ropes of the boat, and towed away their victim, returning the vessel the next day, empty and cleaned, without a trace.

On Monday, the corpse arrived half frozen to a nearby necropsy lab. “It’s into pieces,” said Knut Madslien, a senior scientist in the department of health surveillance at the Norwegian Veterinary Institute. “So you will not recognize that this is a walrus anymore. That is the way we do it.”

The slaughter of Freya has now polarized Oslo and threatened to change the image of a country associated with love of nature, diplomatic do-gooding and Nobel Peace Prizes into one that whacks an adored and wobbly sunbather with mob-like efficiency.

In a land that loves dark detective stories, the hit on Freya has emerged as the slaying of the summer, a marine mystery less about who pulled the trigger than about who is ultimately to blame for the demise of a wrinkled international darling. Victims’ advocates are raising money to build a statue in her honor. Politicians are demanding parliamentary hearings. Scientists are looking at an invasive species of Pacific oysters that may have lured her to her doom.

Mr. Bakke-Jensen and his wife have received death threats (“Karma is a bitch”) leading him to lament “irrational forces.” Mr. Ytteborg, the marina worker smitten with Freya, said he felt “betrayed” by “a death squad.”

“They didn’t have to kill it,” said Marius Løkse, 48, who paused from giving lessons to kids on his small fleet of replica Viking færing rowboats to blame her death on dark political forces and capitalists interested in protecting their yachts. “We would have loved to have had this walrus here,” he said. “She could have settled down.”

Norway’s Directorate of Fisheries, which seemed at first to welcome Freya, became alarmed as people got closer and closer to a very large wild animal. They warned people to leave her alone. But Norwegians, parents and often children, disregarded their warnings.

Authorities said they noticed a change in Freya’s behavior, further provoked by the maddening crowds of social media users. Fearful of a terrible accident, of someone getting hurt, they gave an ultimatum for Norwegians to back off.

“There is a possibility to greenlight a controlled operation to put the animal down,” warned a fishery official on Aug. 11. Officials have said they weighed drugging her with a dart but determined she would have only drowned. On Friday, they decided that she would no longer swim with the fishes.

As Norwegians assign guilt, the culprit, as is often the case, may be the ones who got the closest to the victim.

“They wanted a selfie, a hug with it. Best Friends Forever,” said Kjell Jonsson, 44, who carried a kayak on his right shoulder after giving a lesson. “The blame is on all the people who couldn’t leave her alone.”

Solmund Nystabakk, 40, who watched his son cannonball into the fjord by the Edvard Munch museum, said that the moment a wild animal appeared out of its natural habitat, people projected personality onto it. “All the Free Willy, big water mammal stuff in the wider popular culture plays into it,” he said. “But the animal doesn’t relate to human intentionality. It may care about a lot of things, but its main goal is to survive, to feed.”

And some locals were terrified about being fed on.

Håkon Øverås, a 60-year-old film producer, didn’t want to go into the water at the end of July, but his girlfriend urged him to take a dip off his boat in the Kongen Marina. “Let’s hope the walrus is not here,” he joked. Minutes later, his girlfriend, turned back by the cold water temperature, spotted Freya from the deck. “There it is!” she shouted.

Mr. Øverås splashed toward the ladder. Freya closed in six feet from his legs as he hoisted himself up. “Its sneaks up on you,” he said. On board, his heart pounded and he thought of escape routes. The walrus barked monstrously. “It had this big beard,” he said. “Nasty.”

Others also found Freya unappetizing. “You can’t eat walrus, it tastes like cod liver,” said Kay Johnsen, 56, the owner of Engebret Café, the city’s oldest restaurant, which served rare whale steaks in the Spring. “You’d have to leave it in milk for a long time just to take the smell away.”

For many others in Oslo though, Freya was flawless.

Erik Holm, 32, was in his apartment with his girlfriend when he heard the news of her killing. The execution struck a nerve. The secrecy of it. The coldness. The decision to punish the animal instead of the people. “What do you say to children when you kill a walrus?” he said. He decided he needed to do something. Something big.

He had done big things before. He was the force behind the building of Norway’s largest water slide, a 300-meter tube in the center of Oslo. He had founded a social media site for club kids to share rumors about one another. And most of all Mr. Holm, who is half Swedish, worked on social media campaigns for his favorite Swedish soccer team, helping build up its online following and a statue of the team’s founder.

Then it dawned on him.

In less than an hour he created an Instagram account and crowd sourcing appeal. He liked it with his own page, @Norway, which has nearly 500,000 followers. Influencer friends and celebrities liked it “and made it fly,” he said, while anti-Freya forces trolled his mentions. (“Go buy yourself a teddy bear.”) By Friday afternoon, it had raised more than 238,826 Norwegian kroner, or about 24,290 dollars.

The boat on which Freya spent her final hours belonged to Fredrik Walsoe, 46, a real estate developer who was away at the time. When a friend told him a walrus was on his boat, he said, he realized it was uninsured and thought, “Can I really be this unlucky?”

On Wednesday, as he went to grab his golf clubs from his day cruiser, he showed the rips in the tarp Freya had made with her tusks. He wondered if she was trying to get at some potato chips he had stashed in the cabin.

“I’m sorry they had to kill it, but that’s the way it is,” he said. “Everyone wants it to mean something.”

As the city works through the assassination, Mr. Madslien and his vets, having opened up Freya’s stomach and swabbed her for Covid and ruled out other diseases, are preparing a report. Freya was reduced to dozens of blood and organ samples stored in a subfreezing chamber that he compared to a vending machine.

To prevent the spread of pathogens, procedure dictated that the rest of Freya be dissolved with lye in “a big pot, and I mean, a really big pot.”

This is a horror some of Freya’s fans cannot countenance. But Mr. Øverås, who has been humming the theme song from Jaws ever since his July scare, was at peace.

Reporting was contributed by Henrik Pryser Libell in Oslo and Claire Moses in London.