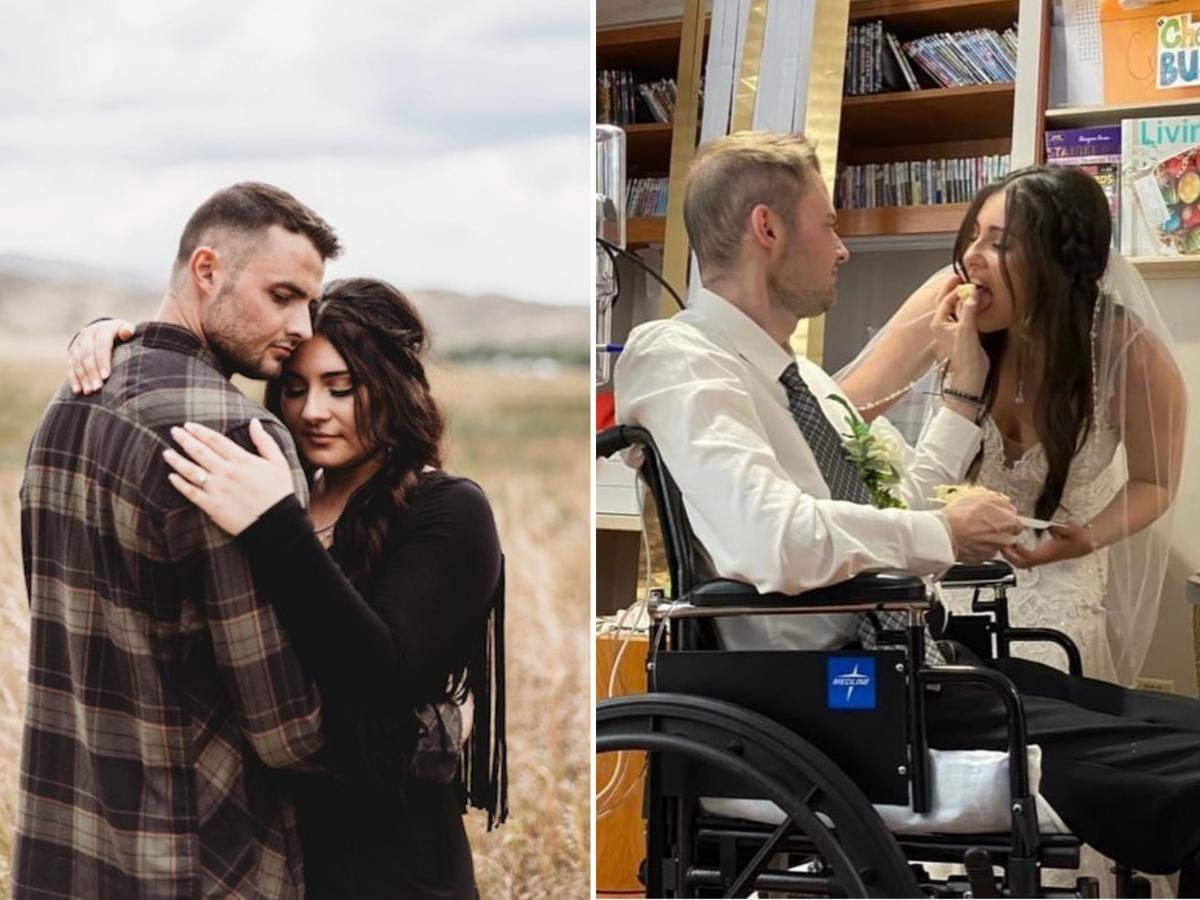 A Colorado couple had their wedding ceremony in a local hospital where the groom was receiving cancer treatment in April.

Zach Stroup, 26, and Madison Stroup, 24, received viral attention after the latter posted a TikTok video in August showing their engagement photos, which had been taken before Zach learned that the cancer he’d fought off once before had returned. The clip, which also shared Zach’s cancer recovery journey and their hospital wedding, amassed over 22 million views at the time of writing.

The couple told Insider they first met in high school in 2015, but were just friends. They said their romantic relationship started in 2018 when Zach sent Madison a Facebook message asking her on a date — the pair attended a Clay Walker concert and became inseparable.

“We have been together every single day since. I think the only time we’ve been separated was when he was in the hospital,” Madison said, referring to Zach’s cancer diagnosis.

In November 2020, Zach was diagnosed with non-Hodgkin lymphoma (also known as non-Hodgkin’s lymphoma or NHL). This form of cancer originates in the lymph nodes, particularly along the neck, armpit, and groin, and affects lymphocytes, a type of white blood cell, which play a vital role in immune system function.

If not caught early, it can spread to other organs outside of the lymphatic system and become more difficult to treat. The American Cancer Society estimated that in 2022, approximately 80,470 people will be diagnosed with NHL, accounting for around 4% of all cancers, and around 20,250 people will die from it.

After a few tough rounds of chemotherapy, Zach told Insider that he went into remission in March 2021. Two weeks later in April, he proposed to Madison on the beach in Florida.

“He told me when he was younger, he never believed in soulmates — and then he met me,” Madison said.

During Zach’s first experience with NHL, Madison said doctors reassured them that while it had a high relapse rate, the survival rate was high, too.

What doctors didn’t anticipate was that Zach’s NHL would come back in December 2021 and target his central nervous system, something that the couple said they were told is rare.

“It was in his thoracic spine and the tumor was growing aggressively,” Madison said. “It was so large that it cut off all sensation from his chest down.”

This recurrence, paired with a pre-existing Crohn’s disease diagnosis in 2020, caused Zach to lose 112 pounds (he previously weighed 240 pounds), and all but 10% mobility on his right side.

“I couldn’t shower by myself. I needed assistance with everything,” Zach said, adding that he also suffered from a perforated bowel which required surgery.

Madison said she became a “24/7 caregiver” for Zach, which was “emotionally and physically” taxing but brought them closer together at the same time. Zach said they lost so much to cancer, such as sleeping in the same bed, traveling, and, due to nerve damage, it was even too painful for him to be touched.

“It shows a lot that we were able to get through all that and our love for each other didn’t change,” he added, noting that it planted the seed for a lifelong relationship.

At the height of their struggle, the couple said they were urged by a social worker to get married: “You guys have lost out on so much. Don’t let cancer take away your wedding,” Madison recalled her saying.

They said they planned their wedding in 48 hours with Choices Foundation, a charity for young adults with cancer that funded their ceremony. The charity provided a cake, artificial flowers, decorations, and gifts. Madison said she’d already bought a wedding dress shortly after becoming engaged but, due to the rush, she didn’t have the opportunity to tailor it.

Still, even though the dress was too large for her, she told Insider it didn’t matter, because the couple “did not want to lose out on the opportunity of being able to marry one another.”

Madison said the legal ceremony took place in April at Presbyterian St. Luke’s Medical Center. She said nurses came in on their day off to do her hair and makeup, and other medical professionals at the hospital stepped up to be their wedding party. While their parents were allowed to attend in-person, other friends and family watched on FaceTime due to COVID-19 restrictions to protect patients receiving chemotherapy.

“I’m so happy that I got to marry the love of my life. There were a lot of times when I didn’t know if we were going to be able to do it or not,” Madison said, adding that their ceremony gave them to strength to carry on. “I know that he fought a lot for me and that is a gift that I can never repay.”

With Zach now in remission, and gaining weight and strength with each day, the couple says they hope to renew their vows in front of those who couldn’t be with them the first time. They also want to return to the beach for a long overdue honeymoon but for now, they’re focused simply on enjoying being married.