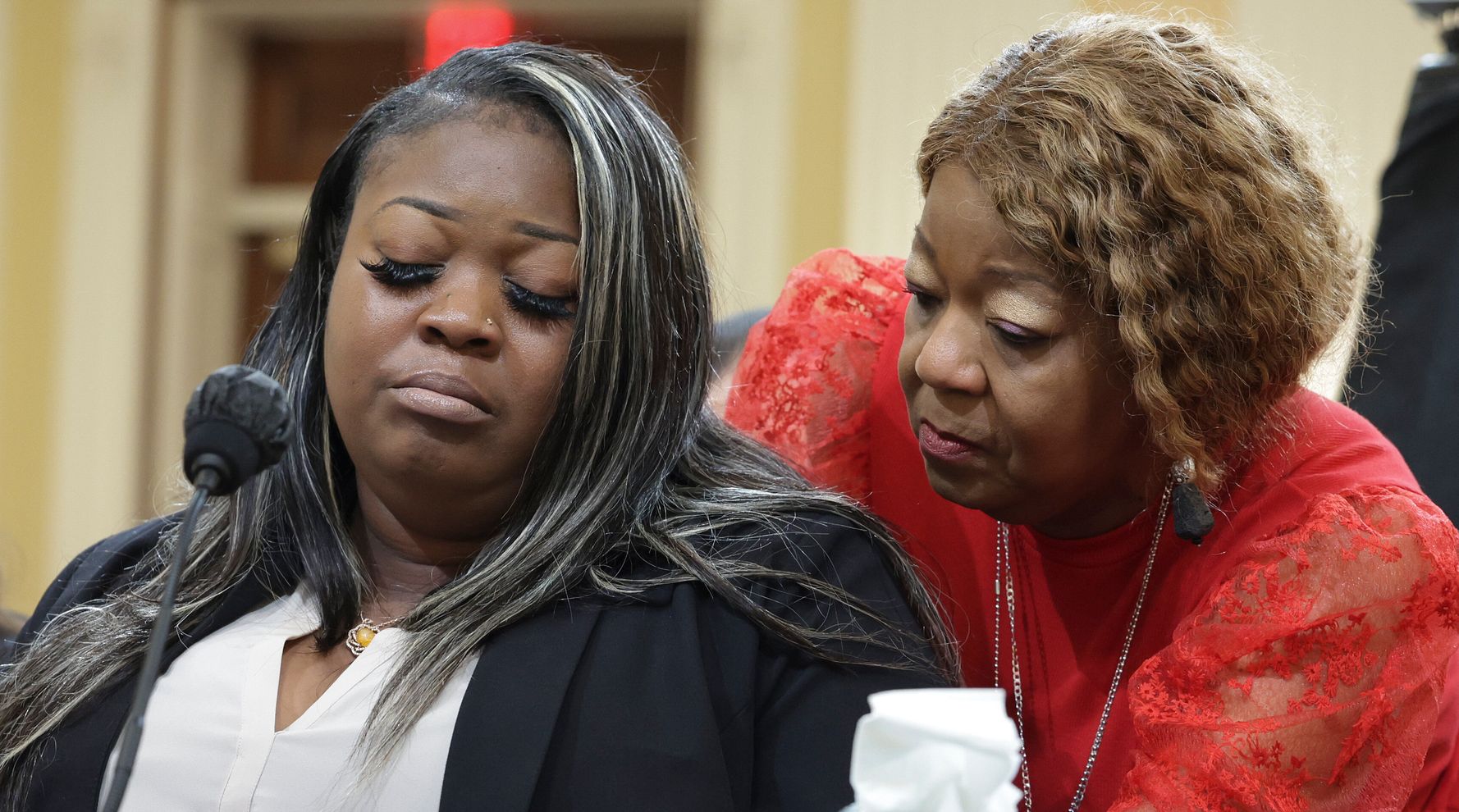 The House select committee investigating the U.S. Capitol attack held its fourth public hearing Tuesday, this time focusing on the intense pressure campaign led by former President Donald Trump as he scrambled to overturn the results of the 2020 election.

Through live and recorded testimony, text messages, video and audio segments, the panel showed how the effort to keep Trump in power for another four years was extensive and unrelenting. Trump’s team took particular aim at fellow Republicans in swing states who might have been in positions to sway the final outcome, either by falsely revising the final tallies, meddling with the Electoral College or saying evidence of fraud had been found. But there was zero evidence of election fraud on a scale that could have affected the results.

Fueled by the wrath of his supporters, Trump’s anger at having lost the election put him on a direct path to lighting the spark that ignited on Jan. 6, 2021, with the deadly attack on the Capitol building, according to the committee.

Here are six of the the biggest takeaways.

Trump’s lawyers pressured Republican officials in swing states to overturn the election results but provided no proof of fraud.

The committee presented evidence showing how Trump attorneys Rudy Giuliani and Jenna Ellis aggressively lobbied officials in swing states, including Arizona, Pennsylvania and Georgia, to help them try to overturn the election results.

In audio clips played at the hearing, Giuliani and Ellis can be heard calling Bryan Cutler, the Republican speaker of Pennsylvania’s state House of Representatives, several days in a row in late November.

“I really have something important to call to your attention that I think really changes things,” Giuliani said in one call. According to the committee, Cutler found this inappropriate and directed his lawyers to tell him to stop calling, but Giuliani would not back down.

Russel “Rusty” Bowers, the Republican speaker of Arizona’s state House of Representatives, said the pair put similar pressure on him. He recalled Giuliani telling him, “We’ve got lots of theories. We just don’t have the evidence.”

The lawyers offered to provide evidence, Bowers testified, but never did.

Brad Raffensperger, Georgia’s Republican secretary of state, testified that his office relentlessly pursued allegations of election fraud, opening nearly 300 separate investigations, but came up empty. In one case, Trump’s team claimed that 66,000 underage voters were counted, but Raffensperger’s office found no evidence to back it up.

“The numbers are the numbers. We investigated every allegation,” Raffensperger testified. He said his team “ran down the rabbit trail to make sure our numbers were accurate.”

Trump had infamously told the Georgia official he needed to “find” just enough votes for Trump to win the state. On Tuesday, Raffensperger testified: “What I knew is we didn’t have any votes to find. There were no votes to find.”

A mother-daughter duo of Georgia election workers described how their lives were affected by Trump’s targeted attacks.

Ruby Freeman, who said she used to go by Lady Ruby, was a poll worker in Georgia during the 2020 election. She and her daughter, Wandrea “Shaye” Moss, found themselves personally attacked by Trump and his supporters in the wake of the election as Trump relentlessly fueled the idea it had been rigged against him.

Moss testified with her mother sitting behind her. Portions of Freeman’s videotaped testimony were also played at the hearing. They said their lives had been upended by the abuse, which came online and in person after Giuliani shared security camera footage of the pair counting ballots. Trump’s team accused the women of counting “suitcases” of fake ballots that favored Biden.

“Nowhere. There is nowhere I feel safe. Do you know how it feels to have the president of the United States target you? The president of the United States is supposed to represent every American, not to target one,” Freeman said in her recorded testimony. She left her home for two months in early 2021 amid the harassment, which included death threats.

Freeman added: “But he targeted me, Lady Ruby. A proud American citizen who stood up to help Fulton County run an election in the middle of a pandemic.”

Moss said she felt guilty for exposing her family to so much hate: “I felt bad for picking this job, for always being the one who wants to help.”

Trump supporters flooded other officials with messages telling them to say Trump won a second term ― or else.

Michigan’s state Senate majority leader, Mike Shirkey, a Republican, said that after Trump tweeted out his phone number, he received around 4,000 text messages. Bowers said his office in Arizona was inundated with phone calls, emails and text messages from Trump supporters, making it hard for his staff to communicate with one another.

The pressure on Bowers led to personal attacks at his home, where his adult daughter was dying of a chronic illness.

During his testimony, Gabriel Sterling, Georgia’s voter system implementation manager, was asked about angry and impassioned remarks he made before the attack on the Capitol, warning that somebody was going to get hurt if the personal attacks on his colleagues didn’t stop.

The Republican official said the “straw that broke the camel’s back” came after Trump supporters began targeting a contractor who worked for Dominion Voting Systems. Someone Sterling normally regarded as “pretty unflappable” called to tell him about it.

“I did pull up Twitter. I scroll through it, and there’s a particular tweet,” Sterling testified. “It had his name, ‘You’ve committed treason. May God have mercy on your soul.’ And a slowly twisting GIF of a noose.”

The attackers also turned to Raffensperger. He testified that Trump supporters threatened his wife with sexual violence, and some had broken into the home of his daughter-in-law, a widow with two children.

Bowers refuted a statement Trump sent Tuesday just before the hearing began in which he claimed the Arizona lawmaker told him he supported the idea that the 2020 presidential election had been “stolen.”

“I did have a conversation with the president, but that certainly isn’t it,” Bowers testified, adding he never called it a rigged election to “anyone, anywhere, anytime.”

Trump claimed the opposite in his statement, writing that Bowers “told me that the election was rigged and that I won Arizona.”

John Eastman, a lawyer for Trump, told Bowers to just hold a vote to decertify Arizona’s electors “and let the courts sort it out.” Bowers testified that he replied: “You are asking me to do something that’s never been done in the history of the United States.”

Bowers also testified that Rep. Andy Biggs (R-Ariz.) called him the morning of the Jan. 6, 2021, attack on the U.S. Capitol while a joint session of Congress met to count the electoral votes.

“He asked if I would sign on both to a letter that had been sent from my state and/or that I would support a decertification of the electors, and I said I would not,” Bowers said of his conversation with Biggs. Other witnesses have told the committee Biggs was closely involved in planning the rally that led to the Capitol riot.

Damning text messages displayed at the hearing revealed that, shortly before Vice President Mike Pence was scheduled to certify the election results, Johnson aide Sean Riley contacted Pence staffer Chris Hodgson to say the senator wanted to “hand” Pence an “alternate slate of electors for [Michigan] and [Wisconsin] because archivist didn’t receive them.”

Hodgson responded: “Do not give that to him.”

A representative of Johnson, who is running for reelection in Wisconsin, issued a statement Tuesday following the text exchange reveal, writing that he “had no involvement in the creation of an alternate slate of electors and had no foreknowledge that it was going to be delivered to our office. This was a staff to staff exchange. His new Chief of Staff contacted the Vice President’s office.”

At another point, Trump allegedly phoned Republican National Committee chair Ronna McDaniel but handed the phone to attorney John Eastman, who pressured her to help with the plan to install pro-Trump electors. The committee showed video of testimony in which she described the call and the aid the RNC would give.