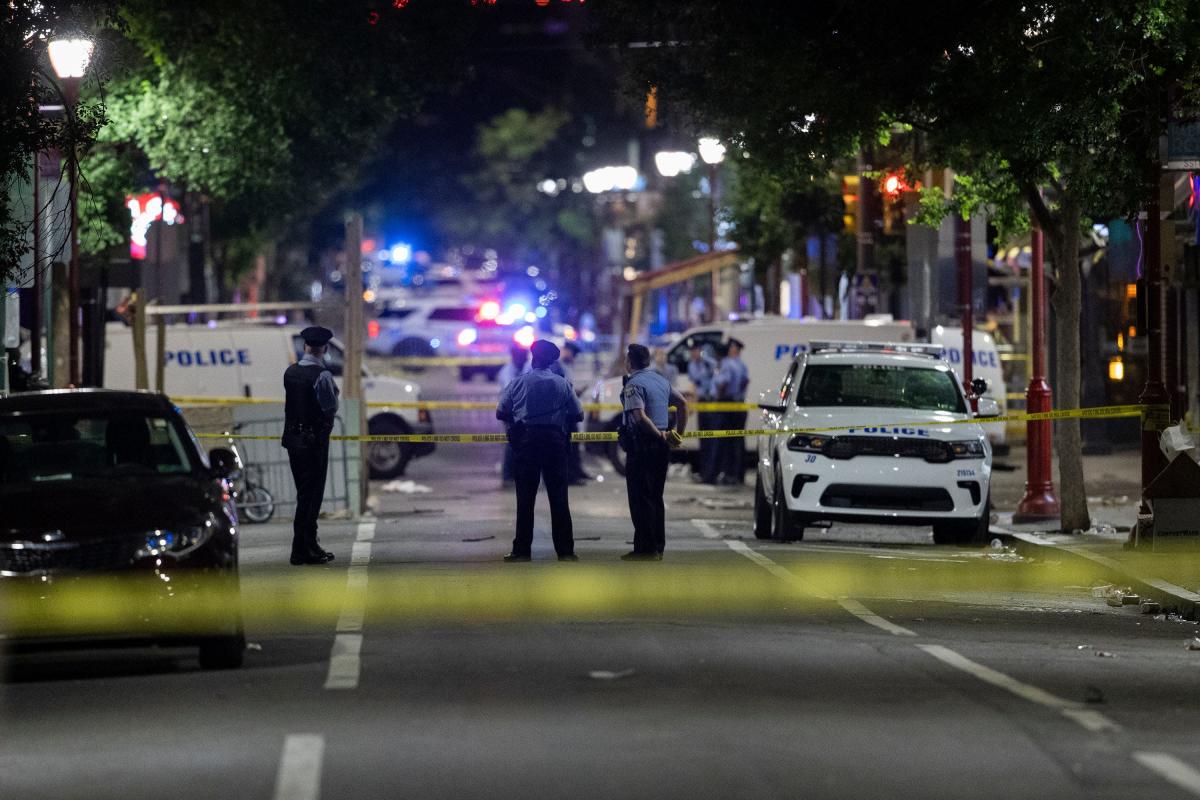 Hours later, a shooting at a Tennessee nightclub left three dead and 14 wounded in Chattanooga. One of the deaths involved a person hit by a vehicle during  in a mad scramble after the shooting started shortly before 3 a.m., Chattanooga Police Chief Celeste Murphy said.

And police in Socorro, New Mexico, on Sunday were investigating a shooting that left five people wounded at a packed graduation party as gun violence continued its unrelenting sweep across the nation.

In Philadelphia, police issued an alert on Twitter shortly before 1 a.m. Sunday that emergency personnel were responding and “several people have been injured. Please avoid the area.”

Officers patrolling the popular South Street entertainment district heard the shots and saw what appeared to be multiple gunmen, Philadelphia Police Inspector D. F. Pace said at a briefing. One officer shot at a suspect; it was not immediately clear whether the shooter was wounded, Pace said.

“The officer engaged the shooter,” Pace said, “and as a result of that brave officer – and again we are uncertain whether he was struck or not – but the officer was able to get that individual to drop his gun and flee.”

Two men and a woman were killed, all suffered multiple gunshot wounds, Pace said. Damien Woods, a spokesman for Thomas Jefferson University Hospital, said 10 people were transported to the hospital. Three were deceased, one was released and the other six were in stable condition.

No arrests were made. Two handguns were recovered at the scene, including one with an extended magazine. Extended or high-capacity magazines carry more bullets.

“Numerous” shell casings were recovered from the area lined with trendy shops, bars and restaurants.

Mayor Jim Kenney called the assault “beyond devastating.” Updates on the investigation would be released as more information becomes available, he said.

“Once again, we see lives senselessly lost and those injured in yet another horrendous, brazen and despicable act of gun violence,” Kenney said. “Until we address the availability and ease of access to firearms, we will always be fighting an uphill battle.”

Police sought help from businesses to gather surveillance video of the attack.

“There were hundreds of individuals just enjoying South Street, as they do every single weekend, when this shooting broke out,” Pace said. “This investigation is fluid. There are still a lot of unanswered questions.”

The traces of Saturday night’s shooting were cleared from South Street Sunday morning, except for the bullet holes that shattered glass at an empty storefront near Rita’s water ice.  Business owners and workers said Saturday’s shooting was a reflection of the worsening violence in the city and laid bare the deterioration of South Street, a long popular spot for shopping and dining just south of Center City.

“Every day the city is crazy,” said Julian Rivera, who has worked on South Street for 20 years.

Andy Vogel, who has lived just off South Street for about 15 years, said he feels unsafe in his own city.

“I’m not surprised by the shootings anymore,” he said. “I’m just disheartened.”

Police are visible on nearly every corner of South Street in the evenings, yet they could not prevent the mass shooting, he said.

Sabrina Leftie, a city sanitation worker, wasn’t surprised when she got the call to report to work on South Street Sunday morning. Years ago a shooting on South Street would have been unheard of, she said. Now, young adults don’t respect law enforcement, she said, and tensions are higher with many people struggling financially exiting the pandemic.

“It doesn’t feel like it is safe anywhere,” Leftie said.

In Socorro, Police Chief David Burton said about 100 teens and young adults were celebrating at a high school graduation party early Saturday when someone began firing into the crowd. Two of the wounded teens were in critical condition.

In Chattanooga, Murphy said there were multiple shooters but that the shooting was considered an isolated incident. Authorities don’t believe there’s an ongoing public safety threat.

“We’re trying to determine exactly what happened and what led up to this taking place,” she said.

“That doesn’t mean taking guns away from responsible gun owners, but it does mean mandatory background checks and prohibiting high-capacity magazines that allow shooters to hurt dozens of people without even having to reload,” he said. “It’s going to be a long summer, and we have got to get out in front of it and put a stop to it.”