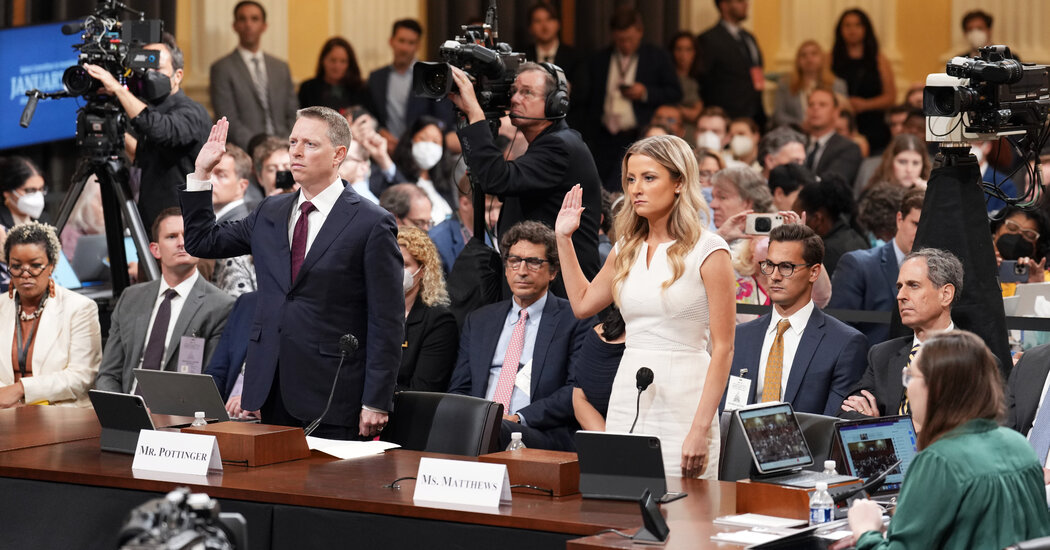 At the eighth in a series of public hearings held by the House committee investigating the Jan. 6 riot, the panel accused former President Donald J. Trump of dereliction of duty for failing to act to stop the assault on the Capitol that was carried out in his name.

The committee documented how, over 187 minutes, Mr. Trump remained in a small dining room off the Oval Office, watching the violence on television and rebuffing pleas by aides, congressional Republicans and family members to call off the mob even as he continued to call senators in the hopes of convincing them to stop the certification of his Electoral College defeat.

Trump Ignored a Torrent of Pleas to Call Off His Supporters

Members of Congress, aides and his own daughter, Ivanka, made pleas to Mr. Trump to call off the violence as it unfolded in front of him on television. But witnesses told the committee that Mr. Trump not only ignored them but repeatedly signaled that he did not want anything done. Text messages and audio obtained by the committee showed that protesters massing at the Capitol were paying close attention to Mr. Trump’s words. Representative Adam Kinzinger, the Illinois Republican who helped lead the hearing, said that the president, after learning of the Capitol breach, resisted putting out a tweet saying “Stay peaceful.”

One witness, testifying anonymously, described an exchange between Eric Herschmann, a lawyer working in the White House, and the White House counsel, Pat A. Cipollone, about the call from the Pentagon seeking to coordinate a response.

“Mr. Herschmann turned to Mr. Cipollone and said ‘the president didn’t want to do anything,’” the witness testified. “And so Mr. Cipollone had to take the call himself.”

Through a range of witness testimonies, the committee demonstrated that Mr. Trump never reached out to the heads of any law enforcement or national security department or agency in the government to seek help in responding to quell the violence. Fox News footage, which Mr. Trump was watching from his dining room, showed how the Capitol Police were under siege, massively outmanned and struggling to repel the crowd. But the president remained unmoved.

The Chairman of the Joint Chiefs of Staff, Gen. Mark Milley, expressed dismay with Mr. Trump’s response in his interview with the committee. “You’re the commander in chief — you’ve got an assault going on the Capitol of the United States of America and there’s nothing? No call? Nothing? Zero?” General Milley said in audio of his deposition.

Members of Pence’s Secret Service Detail Feared for Their Lives

Testimony from a White House security official, who had access to what Secret Service agents in the Capitol protecting Vice President Mike Pence were saying to each other over their radios, showed how agents feared for their lives as protesters drew near. The committee declined to identify the official and masked the official’s voice.

“There was a lot of yelling,” the official told the committee. “A lot of very personal calls over the radio, so it was disturbing. I don’t like talking about it, but there were calls to say goodbye to family members, so on and so forth. It was getting — for whatever the reason was on the ground the V.P. detail thought that this was about to get very ugly.”

The official said Secret Service agents were “running out of options and they’re getting nervous” and that is sounded like “we came very close to either Service having to use lethal options or worse.”

The committee helped bolster the credibility of Cassidy Hutchinson, the West Wing aide who provided dramatic and damning testimony to the committee last month and quickly was attacked by Mr. Trump and his allies. One of the most significant disclosures from Ms. Hutchinson was that there was an angry dispute between Mr. Trump and his security detail in his car when the detail refused to drive him to the Capitol to join his supporters. Testimony played on Thursday from an anonymous White House security official and a sergeant in the Metropolitan Police Department who was driving in Mr. Trump’s motorcade corroborated that claim.

“The only description I received was that the president was upset and was adamant about going to the Capitol,” Sergeant Mark Robinson said in testimony of his deposition played at the hearing. “And there was a heated discussion about that.” Other testimony played by the committee showed that White House aides believed that if Mr. Trump headed to the Capitol he would have been joining a violent event.

Even the Next Day, Trump Would Not Say the Election Was Over

A day after the assault, Mr. Trump taped an address, but he still could not bring himself to say that the election was over. Outtakes from that address obtained by the committee showed an angry Mr. Trump telling the teleprompter operator to edit out of the address a phrase about the election now being over.

“But this election is now over — Congress has certified the results — ” Mr. Trump said in the outtake.

He then stopped reading from the teleprompter.