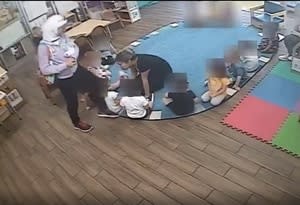 Two Roswell pre-school teachers have been arrested on cruelty to children charges after parents saw them abusing children on a live video from the classroom.

The incident happened in the three-year-old classroom at the Parker-Chase preschool in Roswell last week.

Parents first reached out to Channel 2 Action News on Friday after a mom checking on her son saw two teachers appear to stand on a child’s hand, knee another child in the back and push her forehead backwards.

Brant Duncan and Gloria Barghi immediately called police, rushed to the school to demand the teachers be removed and contacted the victim’s mother.

Detectives watch the video and arrested Zeina Alostwani, 40, and Soriana Briceno, 19 for cruelty to children in the first degree.

Channel 2′s Steve Gehlbach talked to the victim’s mother, who did not want to be identified, but said that what she saw in the video was stunning.

“It was a matter of seconds, and knew what we had seen was deliberate and my stomach was just in my throat at that point,” she said.

Several other victims at the school have come forward since the arrests.

Alostwani and Briceno appeared in front of a judge Tuesday, where prosecutors asked that they not be granted bond. Alostwani was granted a $75,000 bond and Briceno was not given bond based on her asylum and immigration status.

There’s now a much larger investigation into the preschool.

“So we have several weeks of video to go back and review to make sure there are no other instances of this kind of behavior,” Roswell police said.

Gehlbach went to the preschool Tuesday, where officials would not speak. In a message the school sent to parents, the pre-school’s parent company said the teachers were fired and they are shocked and disappointed at what they called “Inappropriate disciplinary actions.”

“While we are extremely grateful that the children are well, we take this matter seriously, and our investigation is ongoing,” school officials said. “We expect our staff to adhere to the highest standards of care, and any failure to do so will not be tolerated.”